Last winter was my best ever for recording darvic, colour ringed Black-headed Gulls in Derbyshire and Nottinghamshire, with 25 different birds seen. These birds returned to their breeding grounds in March, and so I haven't had any new sightings since then... until July.

The first sighting of this "winter" was of a possible returning bird, seen in Bakewell on 13th July (see here). Whilst going through my records I also noticed a Finnish bird that I had seen in Alvaston Park on 11th November 2018. I sent the record off and found out that the bird had been ringed 1808km away, as a pullus, on 6th June 2017.

Today I was at Rufford Country Park, Nottinghamshire, to see who was about, and I wasn't disappointed. The first bird I saw was a very familiar face, EUM3. 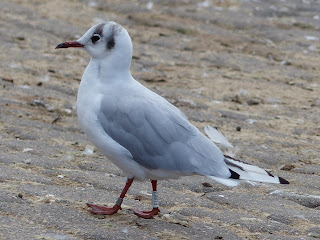 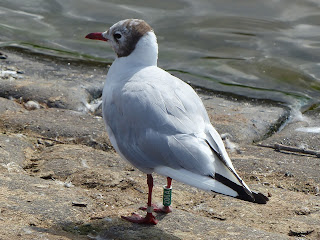 As soon as I saw this bird's ring colour I knew it was one that had been ringed by a member of Sorby Breck Ringing Group, as I'd had 2 other green-ringed birds ending in A, last winter (see here).  As it turned out, it had been ringed by our group on 18th December 2018, as an adult male, 4km away at Sherwood Forest Center Parcs lake. It was sighted at Rufford on 25th January 2019, and my sighting was the first of the winter. Fantastic!!
Posted by Linacreblogger at Tuesday, August 13, 2019