Back on 11th November, Jayne and I drove down to Alvaston Park in Derby to look for some Ring-necked Parakeets that had been reported there. We found 2 feeding high in the trees on the island in the middle of the lake.

Whilst there we were also very lucky to catch up with 4 ringed Black-headed Gulls. 3 of the gulls were metal ringed and had been ringed in Denmark, Sweden and Finland! The fourth bird had both a metal ring, and a darvic ring, and had originally been ringed in Poland. 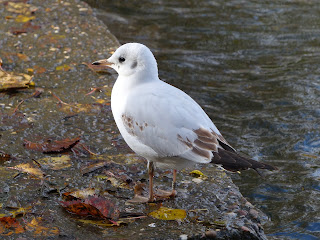 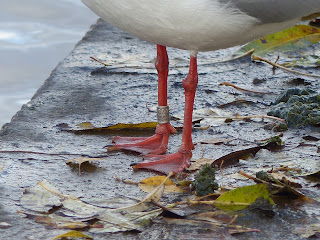 Unfortunately, I could only get 3 digits from the Swedish ring, so I won't be able to get any more details of this bird. 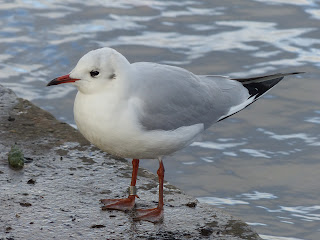 I managed to get most of the digits from the Finnish bird's ring, just missing the last one! I've sent off the details that I could see, so hopefully, I'll be able to get some details later. 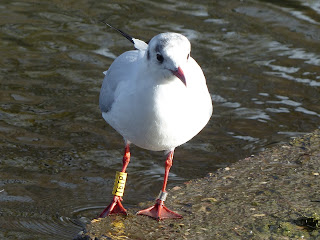 Yesterday morning we (Sorby Breck Ringing Group) were down at Linacre to carry out a ringing session. Unfortunately, just one hour after we arrived, if started to rain, and we had to pack up. As a result we ringed just 11 birds, as follows (new/retrap): Robin 1/0, Goldcrest 2/0, Blue Tit 1/0, Great Tit 4/1 and Chaffinch 1/0.
Posted by Linacreblogger at Monday, November 12, 2018 No comments:

During last month's WeBS walk, Luke and I found 2 "female type" Teal. This morning we were down at Linacre again, to carry out this month's count, and one of the first birds we saw was a male Teal. We managed to get quite close and got a decent photo. Later in the morning we found this same bird, and a female, together on the other side of the middle reservoir. We can't be sure, but it would be nice to think that this morning's birds were the same two as last month, and that the male bird has come out of eclipse plumage. This species is less than annual at Linacre, so hopefully, they'll stay around for the rest of the winter, and perhaps into 2019. 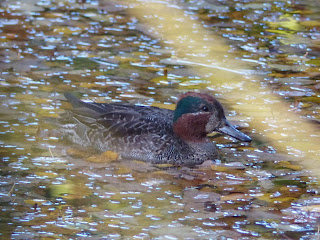 Away from the water, there were at least 6 Redwings, 1 Mistle Thrush and several Blackbirds feeding on a Hawthorn bush by the top reservoir, where we also had a Raven fly over, and a confiding Robin. 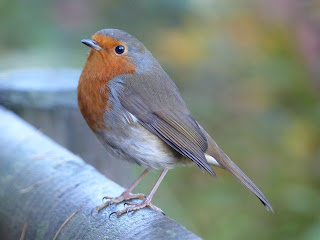 Robin
Posted by Linacreblogger at Saturday, November 10, 2018 No comments:

It's been two months since I last blogged about my "year list". The obvious reason is that it hasn't increased too much, with just 2 new species added; Grey Phalarope and Purple Sandpiper.

The Grey Phalarope was a bird seen at Loscoe Dam on 23rd September. It showed well, but distantly, so no photos unfortunately. It was present for a couple of days, before being eaten by a Pike!!

The Purple Sandpiper was seen this week (thanks Jayne!) on the harbour wall in Brixham.

The other species, which wasn't a year tick, but was good to see, was Great White Egret. Two birds, my highest count in Derbyshire, were present today at Pebley Pond yesterday and again today. Again, they kept a distance away, but I managed to get a record shot! 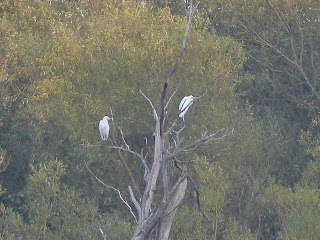