Whilst in Llandudno on Wednesday, I noticed that one of the Herring Gulls on the promenade was wearing a darvic ring. 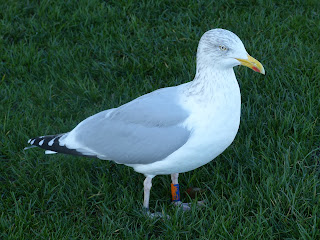 I managed to get a few photos, and noticed that the combination of 3 orange letters over blue looked familiar. After a bit of searching I realised that this combination was the same as the Lesser Black-backed Gull I'd seen in Worcester in May this year (see here). I contacted the ringer who confirmed that it had indeed been ringed by The Severn Estuary Gull Group at a landfill site in Gloucestershire on 12th December 2009 as an adult bird. It was re sighted a couple of times on the landfill site again in November and December 2010 before moving 187km north to Liverpool, where it was seen in March 2011.  The next sighting was a year later (April 2012)when the bird had moved across to Llandudno, where it seems to have settled. It has been reported another 7 times in Llandudno in the winter months, my sighting being the most recent. It is now 7 years and 16 days since it was ringed. A summer time sighting would now be very useful.
Posted by Linacreblogger at Saturday, December 31, 2016 No comments:

I was down at Linacre this morning to carry out this month's WeBS count. We were very hopeful of recording the immature Shag, after missing out on it on the last few visits. We did find it today, but unfortunately it had died. We found it dead in the beech woods on the north side of the bottom reservoir. There were no obvious signs of injury, so presumably it died from starvation. When I arrived home I had an email from Rod Key, the Derbyshire Ornithological Society's bird recorder, showing a picture of the dead bird, taken on 18th December, so I assume this is when it died. It was found under trees which are used for roosting by Cormorants, so perhaps it had been roosting here too, had died and fell down onto the ground? Whatever happened, it was quite sad to see this bird dead, after such a long stay. Who knows when or if I'll ever record another at Linacre. 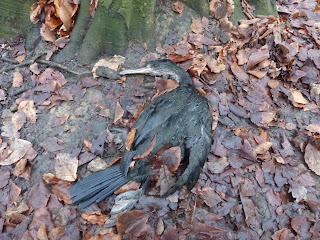 The woods were busy today with at least 10 Goldcrests seen. 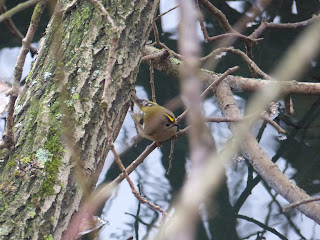 6+ Treecreepers, a male Bullfinch, Blue, Great and Coal Tits, Great-spotted Woodpeckers (4), Nuthatch, Magpie, Carrion Crow, Redwing (3 over), Woodpigeon, Chaffinch and 1, possibly 2 Chiffchaffs, that were feeding in trees on the south side of the middle reservoir, were also present. 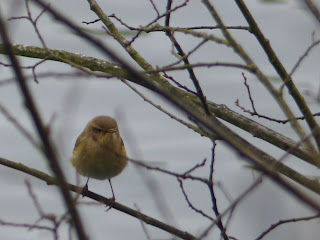 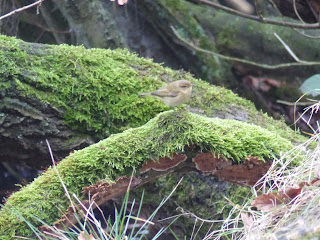 Since I started ringing back in September 2011 I've always concentrated on passerines, simply because these are the types of birds that are most plentiful in this area, and therefore, form the majority of the ringing carried out by Sorby Breck Ringing Group.

Well, this weekend I decided to spread my wings (pardon the unintended pun), and join up with the SCAN Wader Ringing Group in North Wales, to try my hand at wader ringing. Our first session took place on the Friday night. We met up at 8pm at Llanfairfechan, where we set out mist nets on a nearby nature reserve to catch Dunlin and Redshank. We were successful with both species, and I was able to learn the techniques of ageing as well as to ring both species. Several of the birds were retraps, but 1 of the Dunlin was especially interesting as it also carried a coloured flag. Steve, the leader of the group, thought it was most likely from a scheme in mid Wales. In addition, we also caught 1 Snipe. Ringing finished at about 1am, and we got to bed at 2am.

Saturday morning started with a 7am wake up call, and we were out by 8am. This time we set up a short distance down the coast, and set up 2 canon nets. This type of bird capture was completely new to me, and very interesting to see and take part in. After  a few hours the tide had come in, and there were enough Redshanks in the catching area. This time we caught 53 Redshank and a single Turnstone. The Turnstone was ringed by another member of the group, but I was able to ring more Redshank, and also began to take a few more measurements, such as wing length, length of tarsus and toe,bill length and head and bill length. The latter measurements involved using set of callipers, which, again, was something new for me. One of the more experienced members of the group did the measurements first, and then I measured the same bird. Unsurprisingly, our measurements differed somewhat, so more practise is needed!

After an early night, I was up again at 7am on Sunday, and out to Beaumaris on Anglesey to set up the cannon nets. 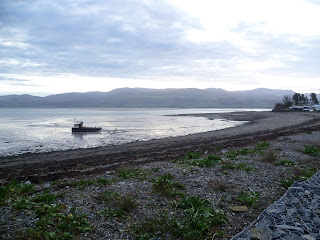 Unfortunately, the Oystercatchers that we were hoping to catch didn't settle in the area where we'd set the nets, so we didn't catch any. We then tried a different area in Beaumaris for some Dunlin and Turnstone, again without luck. By this time we'd lost the light and the tides had turned, so we called it a day.

As a first introduction to wader ringing, the weekend was a great success and I'll hopefully be back out with the group again in 2017.
Posted by Linacreblogger at Monday, December 19, 2016 No comments:

I was down at Linacre again yesterday morning with Sorby Breck Ringing Group and Luke, for what will most likely be our last ringing session there of 2016. It was grey, overcast, still and 11 degrees when we arrived, and we caught 48 birds of 6 species in just over 3 hours.

In between net rounds we spotted the following: Sparrowhawk (2 sightings, possibly of the same bird), Magpie (1), Mistle Thrush (5, possibly 6, including 1 singing briefly, Great-spotted Woodpecker (2), Grey Heron (1 flew over), Lesser Redpoll (flock of c.15 birds), Lesser Black-backed Gull (2 over), a small warbler species, possibly a Chiffchaff and, best of all, an amazing sighting of between 600 - 700 Starlings that flew low over the trees early morning! This by far the highest ever count of Starlings at Linacre- very impressive!

Luke popped down to the reservoirs to see if he could find the Shag. Unfortunately, it couldn't be located, but hopefully it's still there. He did, however, have a couple of Moorhens, 1 Coot, Black-headed Gulls and a Grey Wagtail. A good morning all round!
Posted by Linacreblogger at Sunday, December 11, 2016 No comments:

Last Sunday evening photos of a Dusky Thrush appeared on Twitter. The bird in question had been found in Beeley, a short half an hour drive from home. It was the first record for Derbyshire, and only the 12th record for Britain, so definitely worth a look at. Unfortunately, due to work, I couldn't get across during the week, so I popped across this afternoon and, after an hour and a half, managed to catch up with this bird. It was showing distantly (about 300m away) feeding in a field with a couple of Blackbirds, a Song Thrush and a Redwing. The photos I got aren't worth posting, so instead, to see what one looks like, follow this link to Darley Dale Wildlife's blog here.

This bird is my 3rd new bird of the year (lifer), and is obviously also a Derbyshire, British and Year Tick, taking the Year List to 184 species.

Posted by Linacreblogger at Saturday, December 10, 2016 No comments:

Sunday morning was perfect for ringing, with grey, overcast skies and no wind. I was out with Sorby Breck Ringing Group at the private garden site in Wingerworth, where we had a steady number of birds, resulting in 46 birds of 8 species caught.

News of a large Starling murmuration/ roost at Middleton Moor near Stoney Middleton, Derbyshire, was posted on Darley Dale Birder's website earlier in the winter. Yesterday, Jayne and I decided to drive up to have a look. We arrived at about 3.20pm, and the first birds began to arrive almost immediately. In the next 45 minutes tens of thousands of birds flew in and roosted in the reedbeds. Unfortunately the birds didn't "murmurate" much tonight, but it was still an excellent experience. 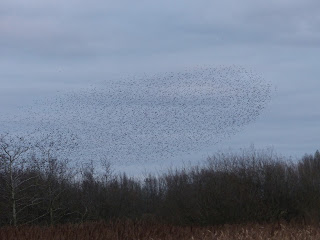 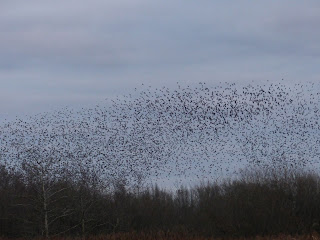 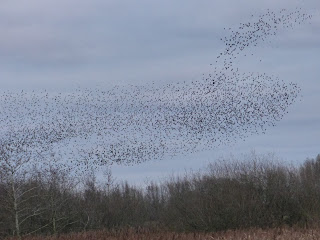 After a break of 2 weeks, Luke and I were down at Linacre again this morning. It was quite mild ( 4 - 6 degrees celsius), grey, overcast and completely still. Waterbirds were present in good numbers, and we had a very nice close encounter with a very confiding Robin. 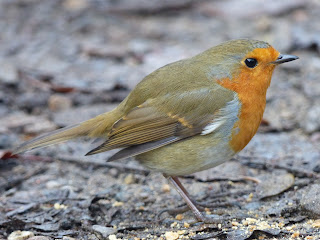 Fieldfares and Redwings were present in the surrounding fields, with 18 and c.20 respectively reported. The Fieldfares flew over, while the Redwings were feeding in the Hawthorn bushes by the top reservoir. A Mistle Thrush was also heard in this area, and a couple of Blackbirds were also feeding on the berries. Siskin were heard, along with a couple of Goldcrests, Jay, Wren and a Magpie.
Posted by Linacreblogger at Saturday, December 03, 2016 No comments: