The Starlings that are nest building in the box on the side of my house have been busy again over the last week. I had a check in the box today and this is what I saw. 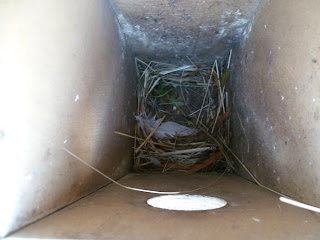 As you can see, the nest is starting to take form, so hopefully, it'll be completed soon, and we'll get some eggs. The details of this nesting attempt will now be added to the BTO's Nest Box Challenge.
Posted by Linacreblogger at Thursday, March 31, 2016 No comments:

I'm off for the Easter holidays at the moment, so I decided to head off to Scarborough for the day with Jayne and Lydia. The sun was shining for most of the day, and I managed to add 3 new birds to the "year list", with 2 Black-necked Grebes in the harbour, along with several pairs of Kittiwakes that were starting to nest build on the harbour walls, and a couple of Rock Pipits on the sea defences.. 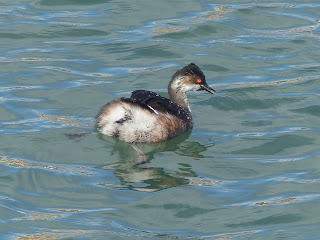 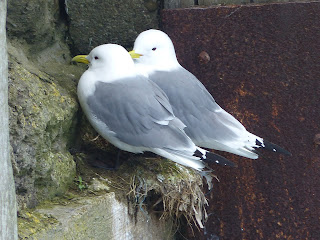 Other birds seen around the harbour were Herring and Great Black-backed Gulls, Peregrine Falcon on the cliffs and Turnstones. In amongst the 20 or so Turnstone were 8 colour-ringed birds. 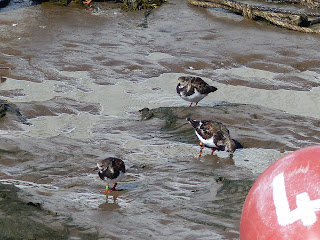 I've recorded colour-ringed Turnstones in the harbour at Scarborough before, back in 2014, and found out that they were ringed in the harbour itself. It'll be interesting to see if they've been reported elsewhere since then. I'll update with details as soon as I get them from the scheme.

Following on from yesterday's sad post about the demise of one of the juvenile/2nd calendar year Shags, I am very pleased to be able to report some good news from Linacre.

At the same time that the Shag was found, Jim Clarke, also found the first summer migrants of the year; 1 Swallow and 2 Sand Martins. When I went down later in the afternoon, I too, dropped lucky and spotted both these species, but I saw 2 Swallows and 1 Sand Martin! 2 Chiffchaffs were also singing.

The Swallow and Sand Martin were new for the year, as was a Red Kite that Lydia found whilst we were driving back from Leeds.

I know that everything has to die, but when that death is caused by human stupidity then it somehow feels more pointless and frustrating than it otherwise would. I got a message on the blog this morning from a gentleman called Jim, who had been to Linacre this morning, and had found a dead Shag hanging by its neck from a tree, tangled up in some discarded fishing line! I popped down there this afternoon, and this is what I found. 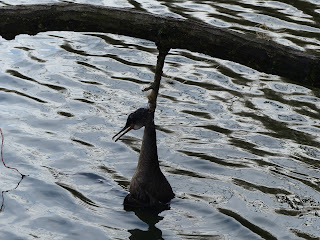 The bird had obviously got caught up in the wire, and then it had tightened around the bird's neck, strangling it. Very, very frustrating and senseless! I wanted to cut the bird down, and throw the fishing line away, but unfortunately, it was about 15-20ft away from the bank. I'll try to get something longer and get rid as soon as possible.
Posted by Linacreblogger at Sunday, March 27, 2016 4 comments:

As the title suggests, the weather today has been great, with lots of sunshine, and bright blue skies for most of the day. I started the day at Linacre with Luke, where we had two and a half hours walking around all three reservoirs.

The highlights of today's visit were the first singing Chiffchaffs of the year (2, with another non-singing individual seen by the boardwalk on the top reservoir), and the juvenile Shag that was still present on the middle reservoir. The Chiffchaffs were 4 days later than in 2015. 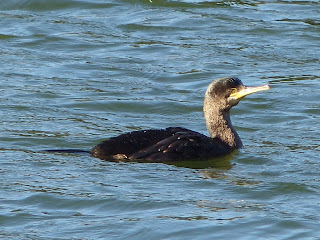 Along with the Shag, there were also 5 Canada Geese (2 pairs on the top reservoir and a lone individual on the middle reservoir- breeding this year perhaps?), 12 Coots, 9 Moorhens, 18 Tufted Ducks, 7 Mandarins (all males), 22 Mallards, 1 Grey Heron, Grey Wagtails (2, including 1 singing bird) and 4 Great-crested Grebes. 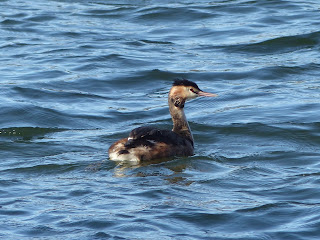 2 Brown Hares were also seen in the fields by the entrance and a single Wood Anemone was out in bloom.
Posted by Linacreblogger at Friday, March 25, 2016 5 comments:

More often than not, when we're ringing in a garden setting, the commonest birds we catch are tits. Yesterday's session at our regular site in Wingerworth, Chesterfield, however, didn't follow this pattern, with the majority of birds ringed being, as the title suggests, finches and redpolls (32 from 57). The finch species caught were (new/retrap): Siskin 13/0, Lesser Redpoll 9/3, Chaffinch 1/0, Goldfinch 2/0 and Bullfinch 4/0. As well as these species, we also caught: Blue Tit 4/1, Great Tit 2/6, Coal Tit 0/1, Long-tailed Tit 0/1, Nuthatch 0/2, Great-spotted Woodpecker 1/0, Wren 1/0, Blackbird 2/0 and Robin 1/2. Here's one of the Lesser Redpolls, a super male bird. 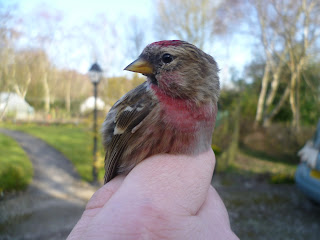 Back in February, I was out ringing with Sorby Breck Ringing Group , at one of our regular sites in Wingerworth, Chesterfield. We had a very busy session with over 100 birds ringed (see details here), including a "control" Siskin, i.e. a bird ringed elsewhere.

Last week we heard back from the BTO, stating that this bird had originally been ringed at a site  in Argyll and Bute, Scotland, on the 24th July 2015. It had then travelled a minimum of 395km in 205 days, before being caught by us in Derbyshire. A great record! 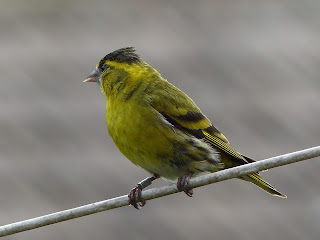 Siskin (not the control)
Posted by Linacreblogger at Saturday, March 19, 2016 No comments:

I wasn't available for this morning's ringing session at Linacre, but 3 other members of The Group were able to get down and, in a three hour session, they ringed  a total of 19 birds of 8 species.

Tits predominated, as is usual at this time of year, with 3 new Great Tits being caught, along with 2 new Blue Tits, 2 new Coal Tits and 3 re-trapped Long-tailed Tits., one of which turned out to be a "control", i.e. a bird ringed elsewhere (more on that later). Other species caught today were (new/retrap); Chaffinch (1/0), Robin (2/1), Dunnock (2/2) and Great-spotted Woodpecker (1/0).

The Long-tailed Tit "control" was a bird that had travelled 11km after being ringed, by our group,  at Renishaw Hall in Eckington, on 13th November 2010, making it at least 6 years old. The oldest known Long-tailed Tit is, according to the BTO's longevity records, (see here), 8 years and 11 months old, so a few more years to go yet for our bird to beat the record. The movement of 11 km is also interesting for a species that is normally regarded as being pretty sedentary. 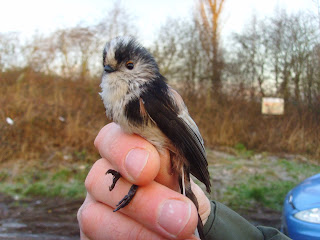 Long-tailed Tit (not today's bird)
Posted by Linacreblogger at Saturday, March 19, 2016 No comments:

Something from the Weekend

After yesterday morning's Linacre walk, Jayne and I went for another walk in the afternoon, this time to the Yorkshire Sculpture Park. We walked around the Lower Lake where we looked at the Heronry on the island. There were at least 12 Grey Herons on the nests, including these two. We couldn't decide whether they were a pair, or a couple of males arguing over nest sites. Whatever the case, I was very pleased with this shot, especially the left hand bird with its crest raised. 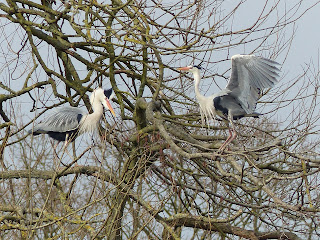 Whilst walking around the lake, we also saw approximately 100 Black-headed Gulls, a dozen or so Teal, 3 Goosander (1 male and 2 "redheads"), Greylag and Canada Geese, 2 Mute Swans, a single Redwing, and a first for this site, an Egyptian Goose!

This morning I was out ringing with the Sorby Breck Ringing Group. Today we joined forces with other members of the group for a ringing demonstration at the National Trust's Longshaw Estate.  The fun started before we got there however, as a Short-eared Owl was spotted perched by the side of the road as we drove past at 6.45am. The session itself lasted for a good four and a half hours, and was very well attended, by at least 30 people. Thankfully, the birds turned up as well, and we managed to ring 60+, including crowd pleasers such as; Siskin, Lesser Redpoll, Goldfinch and a lovely male Great-spotted Woodpecker.

After the ringing session, the sun was still out, so Jayne and I drove across to Bakewell for a walk and a spot of lunch. We also had a walk by the river, so I had a look for the hybrid duck that we'd seen back in February (see post here).  It was still present on the river by the bridge, and this time it came much closer, allowing a much better photo. 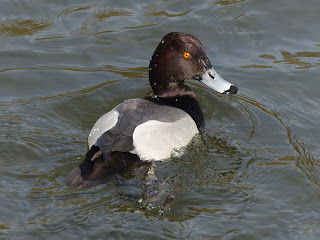 There were still a t least 100 Black-headed Gulls still present on the river, along with Mallards and 6 juvenile Mute Swans. As usual I spent some time taking photos of the gulls. Here's just one. 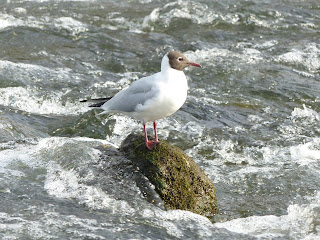 On the drive back from Bakewell we drove past Barbrook Plantation and spotted a couple of Red Deer, which we able to photograph. 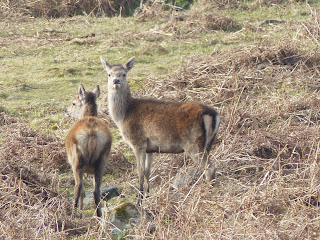 Red Deer
Posted by Linacreblogger at Sunday, March 13, 2016 No comments:

Spring is in the Air

Walking around Linacre for the March WeBS count this morning with Luke, there was a definite spring-like feeling in the air, despite it being just 3 degrees and quite misty. The songbirds were in very good voice, the ducks were chasing each other around, and the Shags appeared to have moved on.

We started our walk by the Rangers' Base, where we had the first of several drumming Great-spotted Woodpeckers. As we walked down to the bottom reservoir we spotted a couple of Grey Wagtails ( 1 of which was singing), the first of 27 Tufted Ducks, and, best of all, a couple of Kingfishers. The Kingfishers, which were chasing each other about and flying up and down the south side of the reservoir, before flying off down towards the river, were, presumably a pair or 2 males in territorial dispute. Either way, very good to see. A Grey Heron was also present on the bottom reservoir. 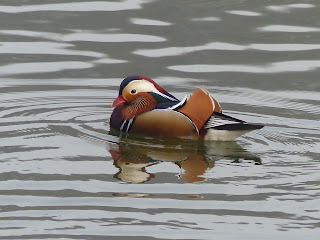 In total, we spotted a total of 9 Mandarins today, including 1 pair looking at a potential nest site in a dead tree on the top reservoir. 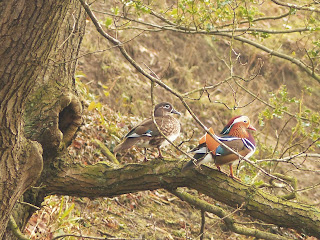 
Moving on to the top reservoir, we had 3 Greylag Geese fly over, and heard the first 2016 Linacre record for Skylark, with 1 singing by the fields on the north side. Coots and Moorhen were seen on all reservoirs, with 9 and 11 seen respectively. No evidence of nests yet though.
Posted by Linacreblogger at Saturday, March 12, 2016 No comments:

Before jetting off to Dublin on Saturday I had a couple of hours down at Linacre with my nephew, Luke. It was grey, overcast and pretty nippy at just 2 degrees, but we still managed to record a few nice birds, including the 2 juvenile Shags, now into their fourth month! 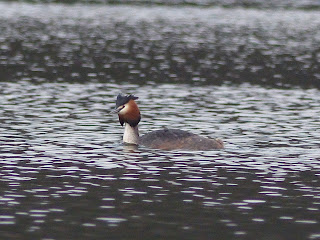 Posted by Linacreblogger at Monday, March 07, 2016 No comments:

Jayne and I have just spent a couple of days in Dublin, celebrating a couple of friends' birthday, and, as well as having a very great time, we've also managed to add a couple of new, unexpected species to the "Year List"; Hooded Crow and Pale-bellied Brent Goose.

The first bird, Hooded Crow, was quite a surprise, as I hadn't even thought about this species being present in Ireland! Checking the Bird Watch Ireland website however, shows that it's the main crow species in Ireland (see website here). We saw this species a couple of times, including in the middle of Dublin. We also saw a few other corvids, namely Jackdaw, Rook and Magpie.

The second species, Pale-bellied Brent Goose, was an even bigger surprise, as we spotted these birds whilst driving back to the airport! Six birds were flying over, and then landed on the River Liffey. Again, the Bird Watch Ireland website shows this race of Brent Goose to be the commonest one in Ireland, with the Dark-bellied race being much less common (see website here). My only English records of this race is in  Holy Island, Northumberland, with these birds consisting of birds that breed in Svalbard. The Dublin Bay population breeds in Arctic Canada and Greenland, before spending the winter in Ireland. See this excellent Bird Guides article of the different races.