This time last year, Luke and I had a day travelling around the North East birdwatching (see here for details). This year we decided to stay a little closer to home, visiting several sites in Derbyshire, Leicestershire and Nottinghamshire.

First stop for the day was the Derbyshire Wildlife Trust's Willington Gravel Pits near Derby. We stopped here hoping to see a Great White Egret, and were lucky to spot it several times flying around the site. 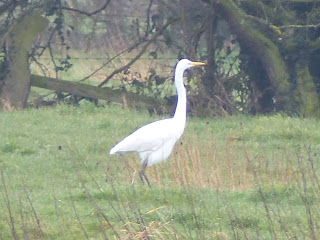 Whilst here we also recorded several species for the "year list" namely numbers 77 to 86. Next stop was a short drive to Newton Solney to see if we could spot 2 Cattle Egrets that were feeding in sheep fields by the road. We spotted one straight away, and managed a decentish photo. 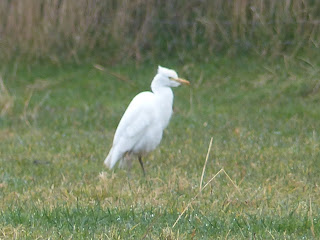 Next up was Albert Village Lake in Leicester. We visited this site to see a juvenile Black-throated Diver. The bird was distant for photos, but we managed to see it well through the 'scope.

The final site for the day was Holme Pierrepont Watersports Centre in Nottingham. The main species we were hoping to see were Spotted Sandpiper and Long-tailed Duck. The first species was quite tricky, and it took about 2 and half hours before we spotted it!! Luckily, when we found it, it came down to within 5m, and Luke managed to get this lovely photo. 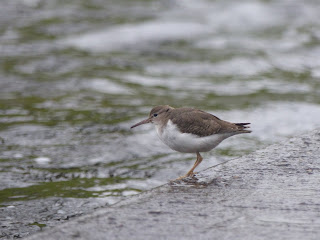 The Long-tailed Duck (a 1st winter male) was easier to see, once we'd worked out which end of the rowing course was which(!). 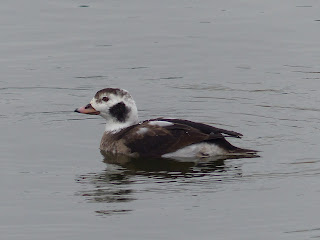 I was down at Linacre this morning, with 2 jobs to do. The first job was to replace a few of the nestboxes that had been damaged by Grey Squirrels last year, just in time for the BTO's National Nestbox Week. In total 6 boxes were replaced, and a few others were picked up off the floor!! Thanks to Chesterfield RSPB Group for providing the boxes. It'll be another couple of months before the first nests will be built, and I can begin to new Nest Record Cards for the BTO's Nest Record Scheme, so I'll report back then. 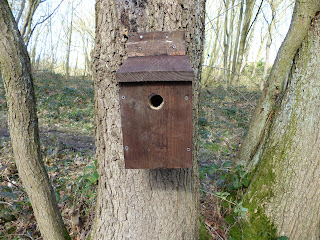 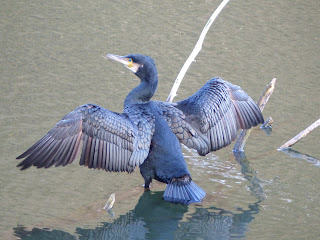 The temperature today was 10 degrees and it was quite sunny, so several of the woodland birds were singing, including 1 Mistle Thrush, 1 Song Thrush, Nuthatch, Coal and Great Tit, Robin and Dunnock. A drumming Great-spotted Woodpecker was heard, as was a "yaffling" Green Woodpecker.

The Snowdrops were looking very nice in the woods by the top car park too. 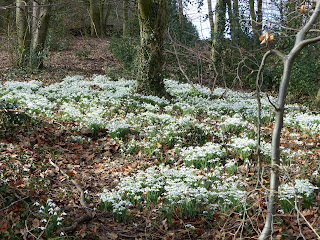 Snowdrops
Posted by Linacreblogger at Tuesday, February 20, 2018 No comments:

At the start of February (10th to be exact) I spotted a colour ringed Canada Goose swimming on the River Wye in Bakewell. The colour ring was AAAH (white writing on a red ring), and, after a quick internet search, I found out that it had been ringed in NW England. I sent off an email and heard back today that the bird in question had been ringed, as an adult female, in Bowness-on-Windermere on 2nd July 2013 (see link here).  The next sighting of this bird was in Bakewell on 29th September 2014, and it was then reported in Rowsley on 26th December 2015 and in Bakewell on 8th August 2017, 14th January 2018, 10th February (my sighting), and again by me, yesterday (17th February). The bird seemed settled in a small group of approximately 10 birds, so it might well hang around. 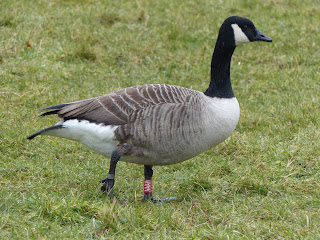 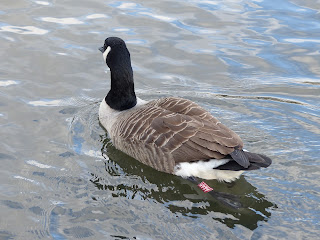 I was down at Linacre this morning for the second ringing session of the year. We started off well with a great catch of 14 Long-tailed Tits ( 8 new and 6 retraps), but then things got quite quiet, until the last net round when we found a new species in the net - a Kestrel!! We often see a Kestrel flying and hunting around the site whilst we are ringing, so today's catch was a very nice surprise. 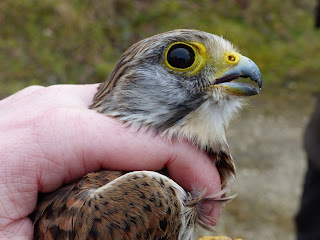 Other birds seen around the ringing site were: Sparrowhawk (1 female), Common Buzzard (1), Great-spotted Woodpecker (4), Green Woodpecker (1 seen and heard), Mistle Thrush (4; 2 pairs, including 1 singing bird), Siskin (1 over), Cormorant (1 over) and Tawny Owl (1 heard calling at 6:45am).
Posted by Linacreblogger at Sunday, February 18, 2018 No comments:

According to BTO website (see here), the longevity record for Blue Tit is currently 10 years 3 months and 10 days from ringing, so hopefully these 2 birds might become  contenders for "record breakers" in the next few years.
Posted by Linacreblogger at Saturday, February 10, 2018 No comments:

Luke and I had a couple of hours out at Holmebrook Valley CP and Linacre this morning. Despite persistent drizzle, and a little bit of sleety snow, we had a good walk.

First up Holmebrook Valley. We arrived at just after 7:30am and saw: Mallard, Coot, Moorhen, Grey Heron, Mute Swan and Kingfisher. 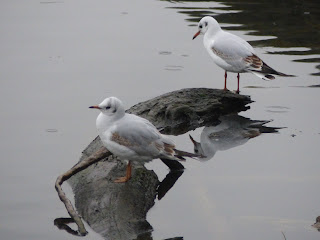 In the afternoon Jayne and I drove across to Sheffield to see 3 Waxwings. we got brief views through the rain!! 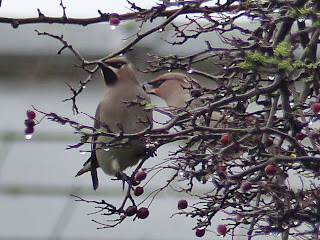