It seems a very long time since I mentioned Linacre on this blog, so here goes with a report of a short walk around all three reservoirs that I took this morning.

After ten days of snow and icy conditions I wasn't sure what to expect, but, after leaving the car at the top car park and walking down, I was pleasantly surprised to find quite a lot of open water. The top reservoir was completely ice free, the middle reservoir had just 5% ice cover and even the bottom reservoir had only 50% ice. 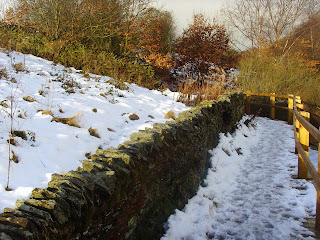 Snow by the top reservoir

I had a walk around the reservoirs and recorded the ususal suspects, in about average numbers for the time of year: Mallard (47, lower than normal), Tufted Duck (15, again lower than expected), Goosander (4; 3 males and 1 female), Mandarin Duck (8), Coot (7), Moorhen (5), Grey Heron (2 flying down the valley), Cormorant (1) and Black-headed Gull (43 on the reservoir and c.30 on floods by the main entrance).

The woodland was quite quiet today, but again the ususal suspects (tits and Nuthatch) were seen coming down to seed I put out. The only unusual reports were a flock of c30 Starlings feeding in the fields by the main entrance along with c 20 Fieldfares.

Posted by Linacreblogger at Sunday, January 27, 2013 No comments:

As most of my readers will know I am an active member of the Sorby Breck Ringing Group here in Derbyshire. The purpose of this short post is just to let people know that the latest report, detailing all the group's activities in 2012 has just been published on the website (click here).

It's well worth a read with several articles about different projects the group's been involved in and also lots of interesting records of birds ringed or recorded by the group throughout the year. Enjoy.
Posted by Linacreblogger at Saturday, January 26, 2013 No comments:

Just a quick blog to say that whilst clearing snow from my car and the driveway a flock of approximately 40 Waxwings flew over the house and disappeared onto the golf course. Although not a year tick, they were very nice to see and the record was sent off to Birdguides and the Derbyshire Ornithological Society.

With a lot of new snow overnight there were still lots of birds visiting the garden again today, with the same species as yesterday. The only new additions today were a couple of Mistle Thrushes, which popped in a brief visit.
Posted by Linacreblogger at Monday, January 21, 2013 No comments:

It's been a snowy weekend here in Derbyshire, so unfortunately both ringing and birding at Linacre have had to be put on hold. Thankfully though I have a very well stocked garden feeding station, so I've spent quite a few hours sitting in the warmth of my living room, with a cup of tea and my binoculars in hand, enjoying the birds and getting some interesting records for the BTO's Garden Birdwatch Scheme. 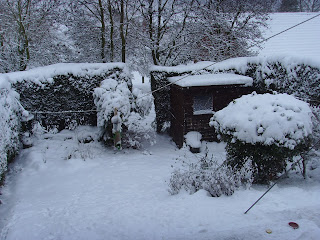 We always have good numbers of Goldfinch on the feeders, so today's count of 16 was very nice, but normal. More unusual were the 2 Song Thrushes that managed to grab some food before being scared off by the Blackbirds, 16 Woodpigeons that discivered the sunflower hearts I'd put out. Normally we have around 2 or 3, but word has obviously got round in woodpigeon circles! Also present today were 15 Blackbirds, including one that took over control of the patio area and water supply, 4 Greenfinch, 5 House Sparrows, 1 Starling, a fly-over Sparrowhawk, 1 Collared Dove, 1 Carrion Crow, 3 Redwings (briefly in the trees at the bottom of the garden), 2 Coal Tits, 1 Great Tit, 2 Blue Tits, a flock of 8 Long-tailed Tits that fed briefly on the fat balls, 7 Chaffinches and a single Lesser Redpoll.

Unfortunately no photos again. I still haven't managed to find out what's going on with Blogger, but hopefully I will soon!
Posted by Linacreblogger at Sunday, January 20, 2013 No comments:

The first WeBS counts of the year took place over the 12th and 13th January when 2 walks were carried out by me and 4 other members of the Chesterfield RSPB Group. Over the two days we recorded 9 species of water birds, the only species missing being the grebes and wagtails. Where were they?

Other birds seen around the reservoirs included Tawny Owls (2 "twitt - twooing" in the woods by Spire View), Common Buzzard (1 in the same area as the owls), several Siskins flying over the reservoirs, singing Great and Coal Tits, 1 overflying Redwing and a new additiotion to the Year List in the shape of a single Treecreeper by the top reservoir.

The Year List moved on one more species today:

76 -Treecreeper
Posted by Linacreblogger at Monday, January 14, 2013 No comments:

Sparrowhawk in the hand

This morning's ringing session was 4 hours in our private garden site in Sheffield. The ringing was initially quite slow, but, by the end of the morning, 25 birds of 12 species (Blackbird, Dunnock, Robin, Goldfinch, Chaffinch, Jay, Sparrowhawk, Nuthatch, Great, Blue, Coal and Long-tailed Tit)  had been  caught. Highlights were a stunning Jay and a first for me, a superb juvenile male Sparrowhawk! 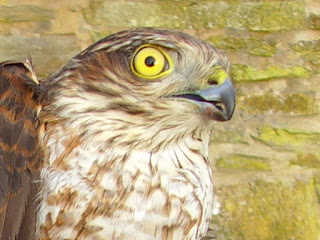 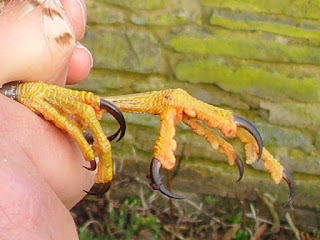 My personal totals were (new/retrap):

Other birds noted during the morning were several flocks of Redwings (40+), which were feeding on nearby fields, along with a  couple of Fieldfares. Also present were House Sparrows and Starlings.

During the week I added 1 more bird to the Year List, when a Tawny Owl was heard calling at 6am from the nearby cemetery.

Linacre Ringing and a Peregrine

After a break of a few weeks I managed to get out ringing again today for the first visit of the year to Linacre Reservoirs. We (Sorby Breck Ringing Group) spent a total of 4 hours on site and caught a total of 22 birds of 8 species (Blue, Great, Willow, Coal and Long-tailed Tit, Jay, Nuthatch and Dunnock).

First bird in the nets was a Jay. We managed to catch 3 at Linacre last year, so 1 on the first visit of the year was a very good start. The next few net rounds produced a few birds each time with members of the tit family, including 4 Long-tailed Tits, scoring high. 1 Nuthatch and 1 Dunnock were the only other species recorded today.

My personal total for the day were: (new/retrap)

Away from the nets we recorded Siskin and Redwing flying over, Song Thrush and Great Tit in song, a Kestrel hunting the area around the ringing site and 2 Sparrowhawks; including a young male bird which flew around the nets and landed on top of the feeders just as we were extracting some birds (well spotted David)! Black-headed Gulls were flying over and a group of approximately 30 were feeding in the fields on the way out. 4 Lesser Black-backed Gulls were seen flying over the ringing site.

After ringing I went into Chesterfield with my wife and daughter where we were lucky enough to spot a female Peregrine Falcon perched up on the Crooked Spire - very nice!


Posted by Linacreblogger at Saturday, January 05, 2013 No comments:

Following on from yesterday's excursion I spent a few hours out at Carsington Water today. The weather wasn't great, but I had a short walk down to the Visitor Centre Hide where I managed several "year ticks".

First new bird of the year was a Redshank seen running along the shore of the reservoir, followed closely by a over-flying Common Buzzard. Out on the water I managed to locate one of the three Great Northern Divers that were present.

Around Horseshoe Island there were 9 Snipe feeding in amongst c.200+ Lapwings, dozens of Teal and Wigeon, a flock of 22 feral Barnacle Geese and 10s of Mallards. Pochard and Coots were out on the water.

Next to the hide there are 2 enormous bird tables and the final year tick of the day was a Willow Tit that was seen coming in. Also on the feeders was a very impressive flock of between 30 - 40 Tree Sparrows, which made a very good sight, along with Chaffinches, Blackbird, Collared Dove, Woodpigeon and Mallard!

The best thing about birding at the start of a new year is that just about anything you see is a "year tick". Today I went out birding with my nephew and we decided, after a trawl of the Birdguides website,  to do a tour of the local area to see how many new species we could find.

First stop of the day was Steetley Quarry, near Worksop, where a first winter Velvet Scoter has been  present since December 2012. The bird was found quite quickly on the largest lake and was "showing well". Other sightings in this area included several year ticks (numbers 36 - 42).

Next stop was Angler's Country Park near Wakefield, where again we spotted a long-sytaying Long-tailed Duck. This bird, a female, wasn't quite as good looking as last year's males in Scotland, but nevertheless, a very good inland tick. Also present here were a herd of 14 Whooper Swans (5 adults and 9 juveniles) and many other lovely birds (numbers 43 - 53).

Right next door to Angler's is Wintersett Reservoir. We had a walk across and picked up 2 drake Scaup in amongst many other wildfowl.(Numbers 54 -55).

The last stop for the day was the RSPB's Old Moor reserve, where we spent  a few hours enjoying the hundreds of Lapwing and wintering duck, as well as adding our last "year ticks" of the day (numbers 56 -61).


All in all, a very enjoyable day out!

My birding year started at about 6.30am this morning when I was woken by a Carrion Crow "cawing" in the garden. This was followed closley by a singing Robin and an alarm calling Blackbird. The following few hours watching the garden added the usual suspects (see list below, numbers 1 - 16) and an unusual record of an over flying Mistle Thrush and a female Bullfinch.

After breakfast I managed to convince the ever-suffering Jayne to have a walk around Linacre where we added a few more "year ticks" to the list (numbers 17 to 32 in the list). Wildfowl numbers were low and there wasn't any sign of any Mandarins or Tufted Ducks! The only exception being the 26 Goosanders (13 males and 13 redheads) that were present on the middle reservoir - my highest ever count and the 2 over-flying Lesser Black-backed Gulls. On the way out we stopped by the main entrance to watch a flock of approximately 50 winter thrushes, which were feeding in the ploughed field. A quick scan show that at least 95% were Redwing, with a few Fieldfare thrown in too. Very nice.

The final part of the day invovled a quick drive across to Screetham Lane near Beeley Moor where we saw 3 more ticks (numbers 33 to 35), the Brambling being the best sighting of the day!

Posted by Linacreblogger at Tuesday, January 01, 2013 No comments: