Another Siskin and 2 Blackcaps

At the end of August I was down at Linacre ringing with Sorby Breck Ringing Group, when we caught a Siskin, the first one to be ringed at Linacre. Well, yesterday I was back down there, and we were lucky enough to catch another one! The first bird was an adult male, whereas yesterday's bird was a young bird, born this year. Hopefully, these 2 birds are just the start of a winter influx.

Along with the Siskin, the other highlight of the morning must be the two Blackcaps. Its always good to see this species, especially as the year progresses, but yesterday's catch included a bird that we had caught back in June (see here).

As well as the ringing, we also recorded a very nice skein of 75 Pink-footed Geese flying NW over the site, my first record at Linacre for 2015. We also had a Tawny Owl calling as we arrived, Skylark flying over and a Mistle Thrush. 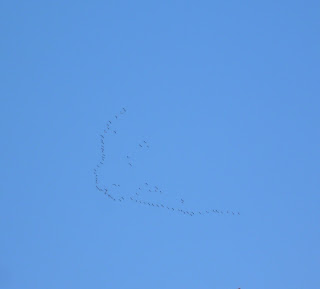 
The sun was out for most of the session, and by the time we were packing up, we'd manage to record a few butterflies as well, namely: Red Admiral (1), Comma (1), Speckled Wood (3) and Small Tortoiseshell (1). 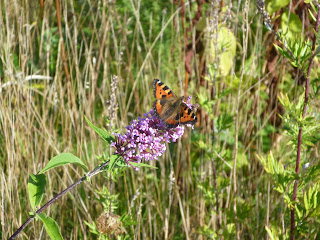 Posted by Linacreblogger at Sunday, September 27, 2015 No comments:

I was out at the weekend ringing with 4 other members of the Sorby Breck Ringing Group, at the private site in Wingerworth, Chesterfield. Conditions were perfect, and over 4 hours we managed to catch 87 birds of 11 species (Blue, Coal and Great Tit, Chaffinch, Dunnock, Robin, Goldcrest, Great-spotted Woodpecker, Nuthatch and Siskin).

As always, the majority of the species caught were the Blue and Great Tits, but the new Great-spotted Woodpecker, and  a couple of Siskins and Goldcrests, were good to see. One of the Blue Tits we caught had an overgrown upper mandible. 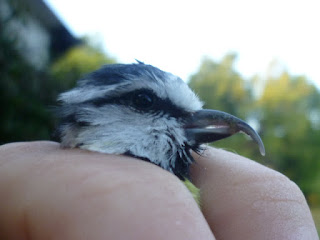 The bird was aged as a 3, i.e. born this year, so it will be interesting to see how it copes with this over grown beak as the year goes on.
Posted by Linacreblogger at Thursday, September 24, 2015 No comments:

The number of birds coming to the feeders in my garden has started to increase again in the last few weeks. When I got home from work this afternoon I filled the sunflower hearts and five minutes later spotted this- a Lesser Redpoll! 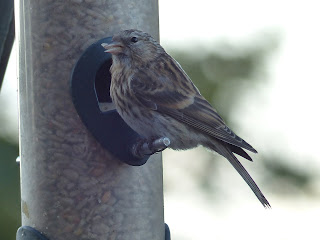 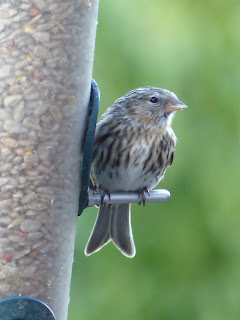 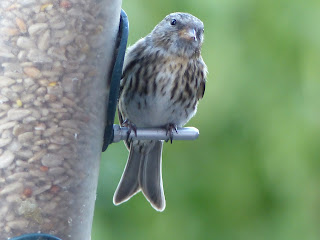 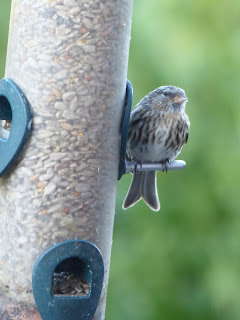 This is my first garden record since February, so it'll be a good record for the BTO's Garden Birdwatch Scheme. Other birds seen recently in the garden are: Blackbird, Chaffinch, Goldfinch, Blue Tit, Coal Tit, Magpie, Dunnock, Starling, House Sparrow, Woodpigeon and Collared Dove.
Posted by Linacreblogger at Tuesday, September 15, 2015 No comments:

There was an autumnal feel when I arrived at Linacre this morning, to carry out this month's WeBS walk. It was a cool 5 degrees and mist was hanging over the water. 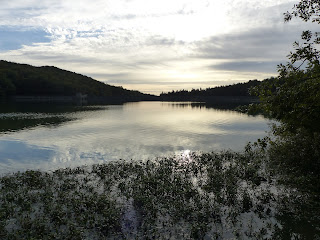 The count started well, as a Grey Heron was heard and seen flying over the site. Another, or the same one, was seen later fishing on the bottom reservoir. A flock of 7 Canada Geese that flew in and landed on the top reservoir, were the first record since 30th May. 4 Cormorants, (3 adults and 1 juvenile), was the highest count of the year so far. Other waterbirds recorded this morning included; Mallard (54), Tufted Duck (19), Moorhen (11; 6 adults and 5 juveniles), Coot (8; 4 adults and 4 juveniles), Grey Wagtail (3), Great-crested Grebe (1 winter plumaged bird), Little Grebe (1, my first Linacre record for 2015. and only the third Linacre record this year!!) and Kingfisher (1 bird seen and heard on the bottom reservoir). 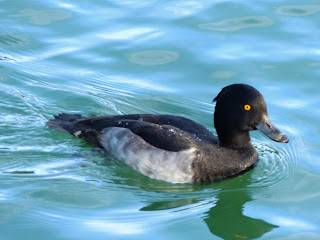 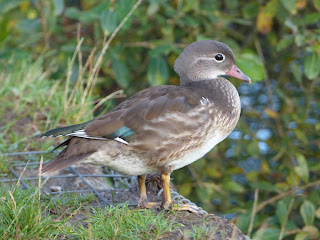 As I was leaving at about 9.15am, the sun had come out, and the temperature had risen to 11 degrees, so a few insects were starting to move, including a hunting Brown Hawker, and a Red Admiral butterfly, sunning itself in the car park.
Posted by Linacreblogger at Sunday, September 13, 2015 No comments:

I had a day at RSPB Old Moor today in search of a Great White Egret, that has been present for a few weeks. After a few hours, and quite a few "near misses" I managed to connect with the bird when it flew out of the reeds on Wath Ings and disappeared onto nearby Bolton Ings. in total, I saw it for about 30 seconds, so no photo I'm afraid!!

While waiting for the egret, I got another "year tick" in the shape of 2 Common Sandpipers that were feeding close to the hides. Other waders present were: Green Sandpiper (2), Dunlin (4), Ruff (4), Snipe (1), Lapwing (c.300), Golden Plover (3 breeding plumaged birds) and Black-tailed Godwit (3). 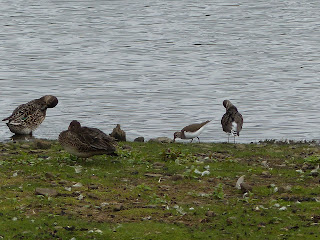 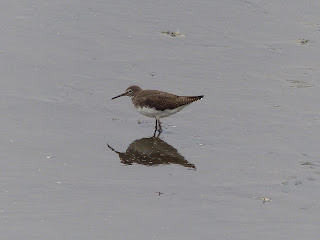 As well as the waders there were a good number of ducks, geese and swans present including: Mallard, Gadwall, Pochard, Wigeon, Teal, Mute Swan, Canada and Greylag Geese. 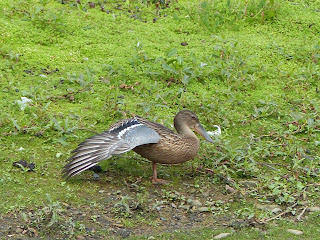 Last but not least were the small birds. I didn't see or hear many, but the highlights for me were dozens of Goldfinch, a single Marsh Harrier, 8 Swallows and 2 Swifts, which are my latest ever record.