I spent a very busy four hours at Linacre this afternoon, with Ray, my ringing trainer, checking the nestboxes again.

In the four hours we were there we managed to ring another 18 broods, which comprised 6 Great Tits and 12 Blue Tits. The size of the broods ranged from 4 - 10 for the Great Tits and from 3 - 13 for the Blue Tits. In total, we ringed 43 Great Tits and 105 Blue Tits. Added to last week's total of 46 birds (28 Great Tits and 18 Blue Tits), we've now ringed 194 chicks, with another 10 boxes still active! Last year we ringed 166 chicks (pulli), so this year has been much more successful.

A couple of the boxes contained clutches of eggs that were just as they were on our last visit, so they've presumably been abandoned. There were also a couple of boxes with dead chicks. One had been chiselled open by a Great-spotted Woodpecker, whilst one had let the recent rain in and had soaked the eggs through. Very annoying!! One to replace this winter.

As always, the results of today's ringing will be sent to the BTO as part of the Nest Record Scheme, and added to details of other nests from around the country, to see if this success has been repeated elsewhere.

While walking around the site, we also noted 3 juvenile Moorhens, my first Linacre record for 2014.
Posted by Linacreblogger at Sunday, May 25, 2014 No comments:

Despite a pretty poor weather forecast, I decided to pop down to Linacre this morning for a few hours. As always, I'm glad I did, as I added a new species of micro moth to the list, and also managed to gather evidence of breeding success for another species of bird.

First up the moth. As I was walking along the path at the bottom of the top reservoir I spotted a small moth with very long antennae  flying around a tree. I watched it land and managed to get a couple of photos. Checking my book at home I found out it's called Nemophora degeerella, a species belonging to the Adelidae family (known colloquially as Longhorns), which is made up of 15 species in the UK. It's common throughout England, so I expect I'll see more examples later in the year (details here). 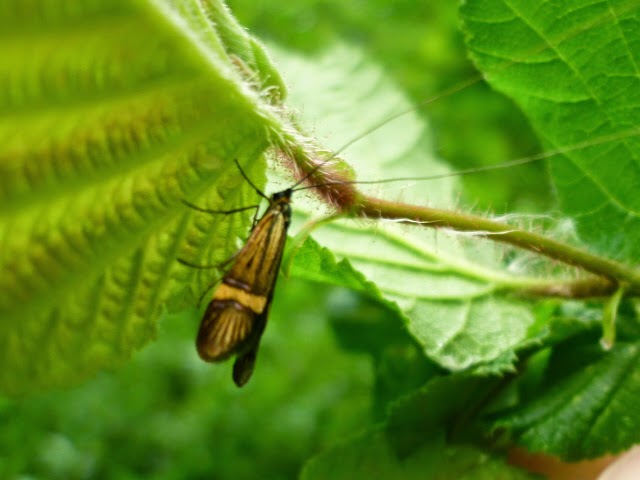 Nemophora degeerella
There weren't many other insects about (that I could photograph or identify!), but I did spot this Red and Black Froghopper. This is a common species at Linacre and I see them on most visits during the summer. 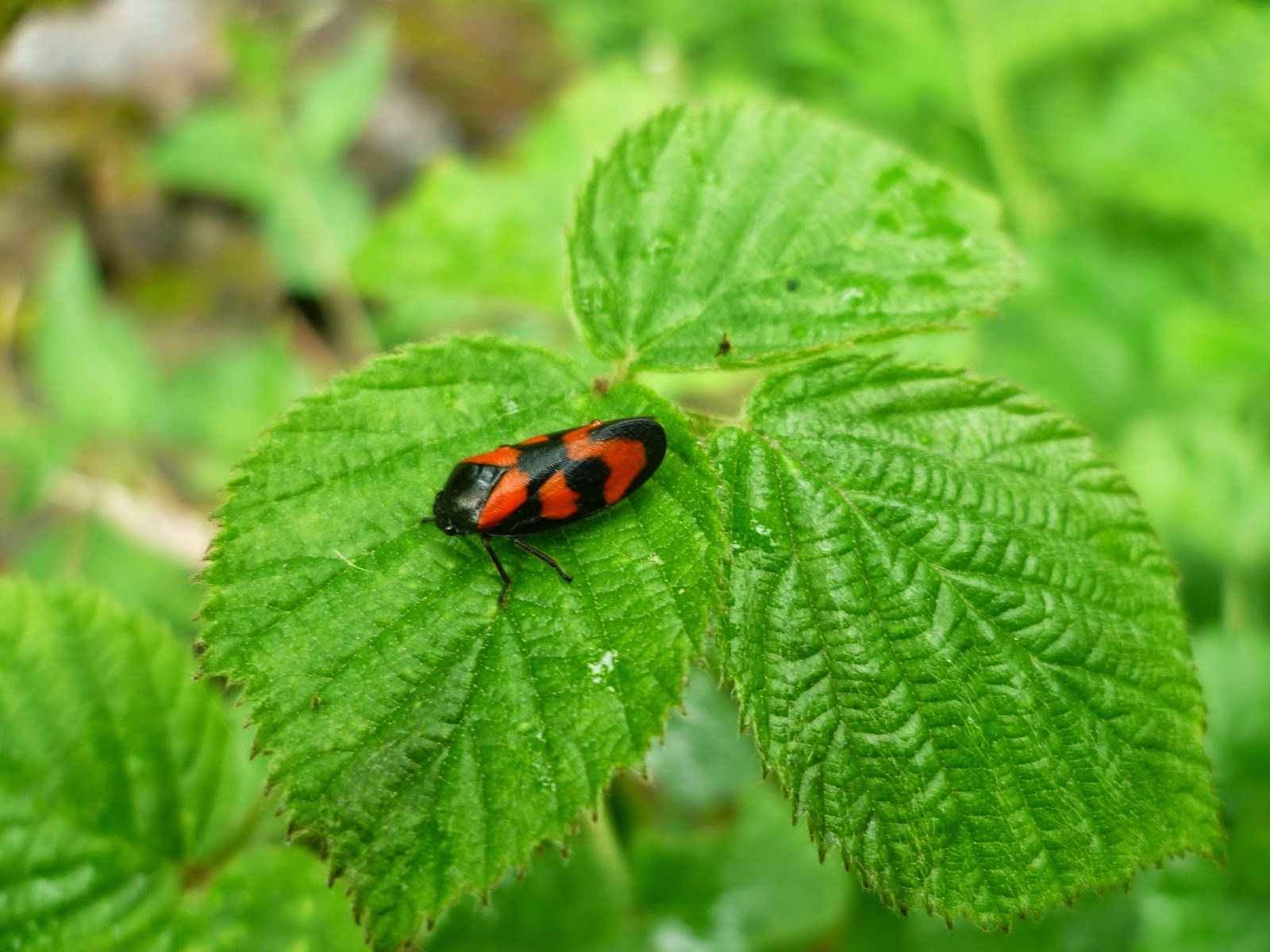 Red and Black Froghopper
Away from the insects, I spotted 5 broods of Mallards, 3 broods of Coots and 2 new Great-crested Grebe chicks on the top reservoir. This means both pairs of grebes have successfully hatched chicks this year, which is brilliant news. The new species with young this morning was Grey Wagtail. 2 adults and one chick were seen around the middle reservoir, which again, is great news after the predation of the nest on the top reservoir.
Posted by Linacreblogger at Saturday, May 24, 2014 No comments:

I've had a Starling nestbox on the side of my house for the last few years. It was first used by Starlings in 2012 (see here), but the chicks died before fledging due to some horrendous weather.

Anyway, this year there's been a male bird singing for what seems like months, without any sign of a nest. I last looked in the box on 4th May and found this: 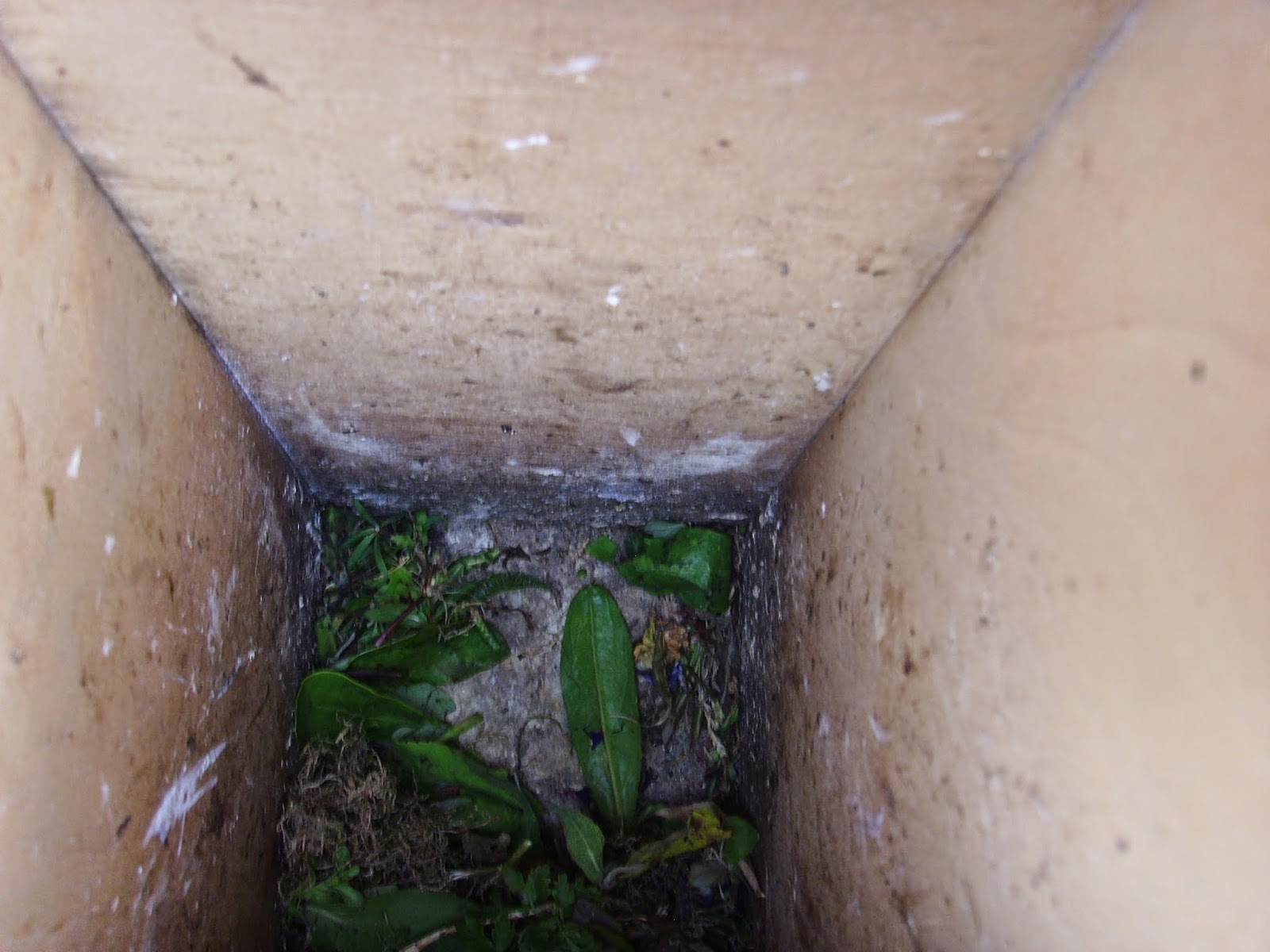 4th May 2014
When I got back from work today, I saw a bird come out of the box, and though I'd have another check, just in case. Well, this is what I saw today. 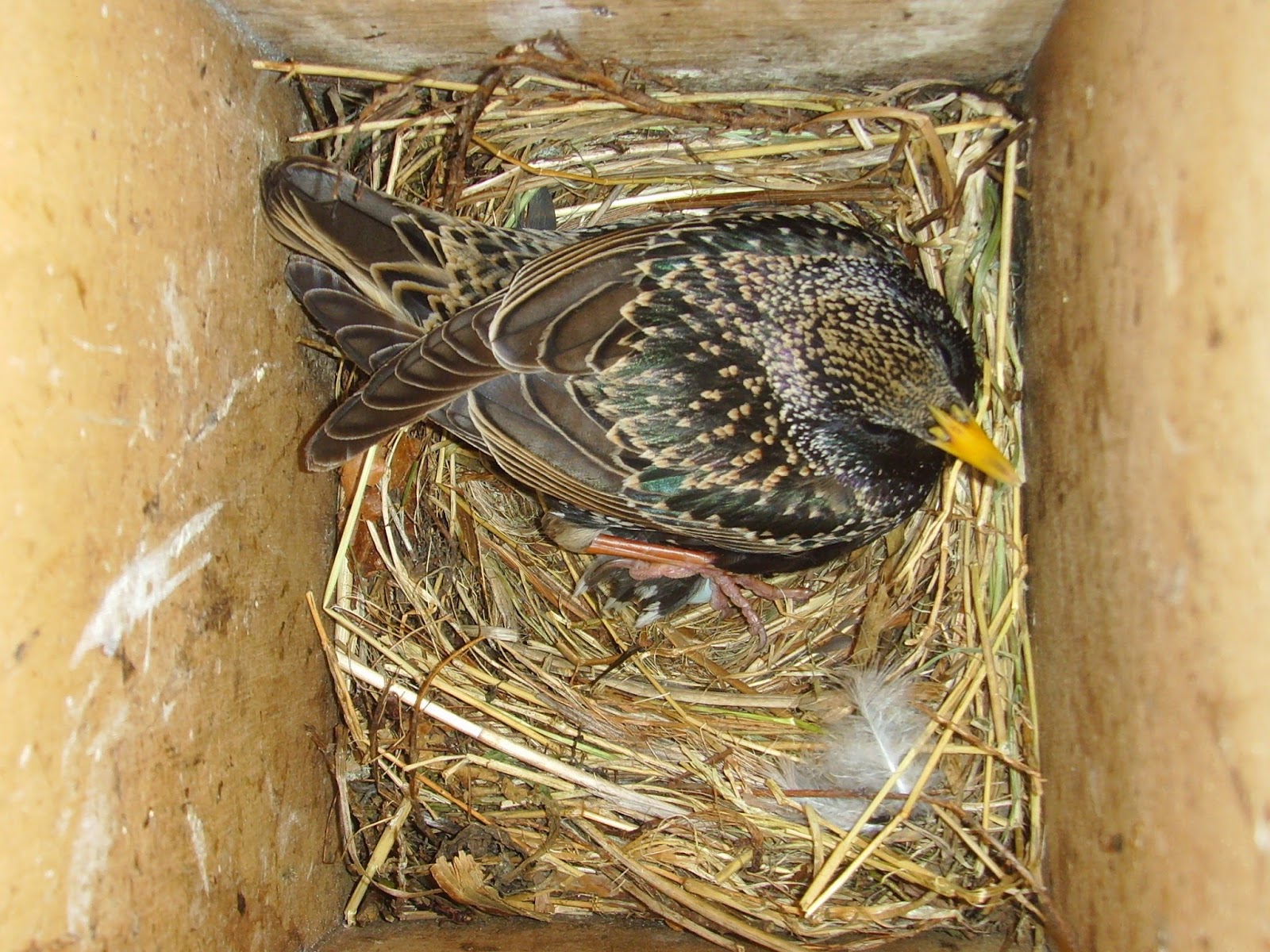 19th May 2014
The bird sat tight, which hopefully means she's on eggs. This nestbox is registered with the BTO's Nest box Challenge scheme, so I'll enter the new details. All we need now is for the good weather to continue.﻿
Posted by Linacreblogger at Monday, May 19, 2014 No comments:

May WeBS and a new butterfly species

Yesterday 3 members of the Chesterfield RSPB Group carried out the monthly WeBS walk around Linacre (thanks you 3).

As always, the May walk can be quite quiet, but yesterday's outing was livened up by the first broods of Mandarin Duck; 3 broods of 4, 5 and 6. Along with 9 adult birds that brought the total to 24. 35 adult Mallards were also seen with ducklings (2, 3, 5 and 7). The Coots, 11 adults, had 4 broods of 2, 3, 4, and 6, and the Great -crested Grebes on the middle reservoir had 3 young! Adult Moorhens were seen, but no young yet. 2 Grey Wagtails were the last water birds reported this month.

The usual woodland birds were reported in the woods, along with 3 Swallows, and singing Blackcaps, Chiffchaff and Willow Warblers.

Before the WeBS walk and the nest box checking I had a walk down to the ringing site to fill the feeders. Whilst there, I also had a walk around in search of insects. The first ones I saw were a Peacock and a Small Tortoiseshell.  Just as I walking back I noticed a small, brown butterfly flying low over the ground. I watched as it landed and crept up to get a better view and a photo. As I got closer I noticed that it was a DINGY SKIPPER!!! 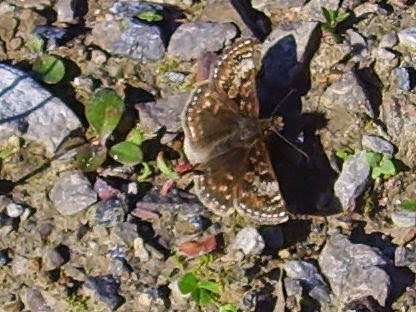 Not only is this a new species for me and Linacre (unless anyone else has seen one before?), but it is also a pretty uncommon species within Derbyshire. As such it is included in Derbyshire's Biodiversity Action Plan (BAP) . I've sent the record to the butterfly recorder for Derbyshire, so I'll update on any further developments.
Posted by Linacreblogger at Sunday, May 18, 2014 No comments:

Two weeks ago I checked the nest boxes at Linacre (see here), and found a good number of eggs and sitting birds. Today I went back with my ringing trainer, to check how they'd come on. Good news- we ringed 46 birds, comprising 4 broods of Great Tit (5,7,8 and 8), and 2 broods of Blue Tit (10 and 8).


Great Tit (1st pullus of 2014)
There were approximately 30 more broods that had hatched in the last few days, and a few that were actually hatching today, so next week will be very busy!
As well as the Blue and Great Tits, we also checked the box that looked like it had a Wren's nest in it, and found ..... a Wren sitting on some eggs. This is the first confirmed breeding of this species at Linacre.
Sadder news is that the Grey Wagtail's nest that  I found, was checked today, and had been predated. The nest had been pulled apart, and all the eggs were gone. Unfortunately this is the outcome for a high percentage of birds' nests. Eggs make a very good meal for many predators, including Squirrels, Stoats, Weasels, Jays, Magpies, Great-spotted Woodpeckers etc.....
To end on a happier note, I had a phone call from a friend from the Chesterfield RSPB Group a few days ago, telling me that she'd seen a Red Kite at Linacre on 3rd May. It was feeding on some road kill by the main entrance. Excellent news, as this is the first record for 2014.
Posted by Linacreblogger at Saturday, May 17, 2014 No comments:

Year List update and a new bird for Linacre

In the 9 years that I've been watching and recording the birdlife at Linacre there is one species of bird that, although very common in the surrounding area, I've never managed to record there, namely Greenfinch. I'm not sure why this is, but on Saturday, while leading a walk for the rangers, I spotted a male bird in the woodland by the bottom reservoir. A very nice new addition!

Apart from the Greenfinch, the walk was quite quiet, the highlights being my first Linacre Swift of the year, a couple of Common Buzzard, singing Chiffchaff, Willow Warbler and Blackcap, and 2 Coot chicks.

Today (Sunday), I spent a few hours with Jayne, at RSPB Old Moor. We'd just gone, for a walk and a spot of lunch, but, in the end, we ended up with super views of a hunting Hobby, 12 Whimbrels, a booming Bittern along with singing Reed Warblers, a Common Sandpiper and a lovely summer-plumaged Dunlin.

I had the moth trap out again on Saturday night. When I checked it this morning (Sunday) I had 1 moth and a caddisfly!!

The only moth, however, was a new one for me and for the garden, a Brindled Pug (see here).Thanks Ispot! 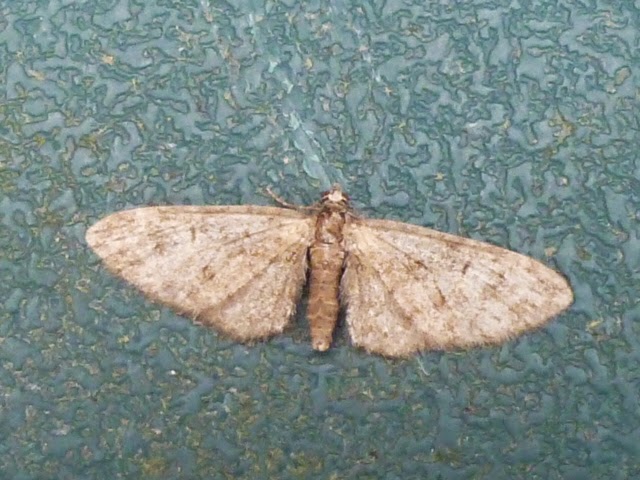 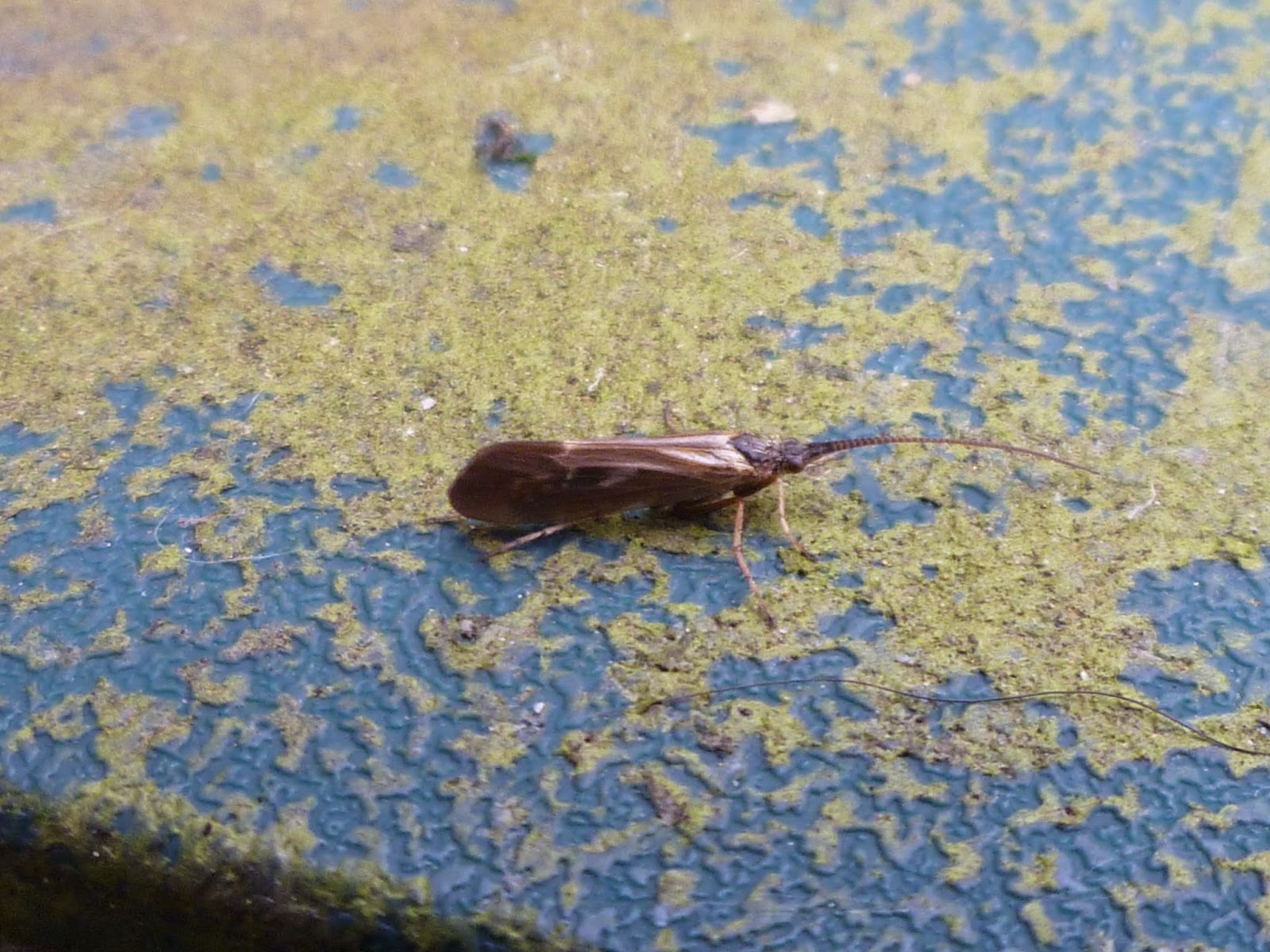 Caddisfly sp
Other moths that have been in the trap since my last posting are: Early Thorn (4th April), Beautiful Plume (5th April) and Early Grey (18th April). 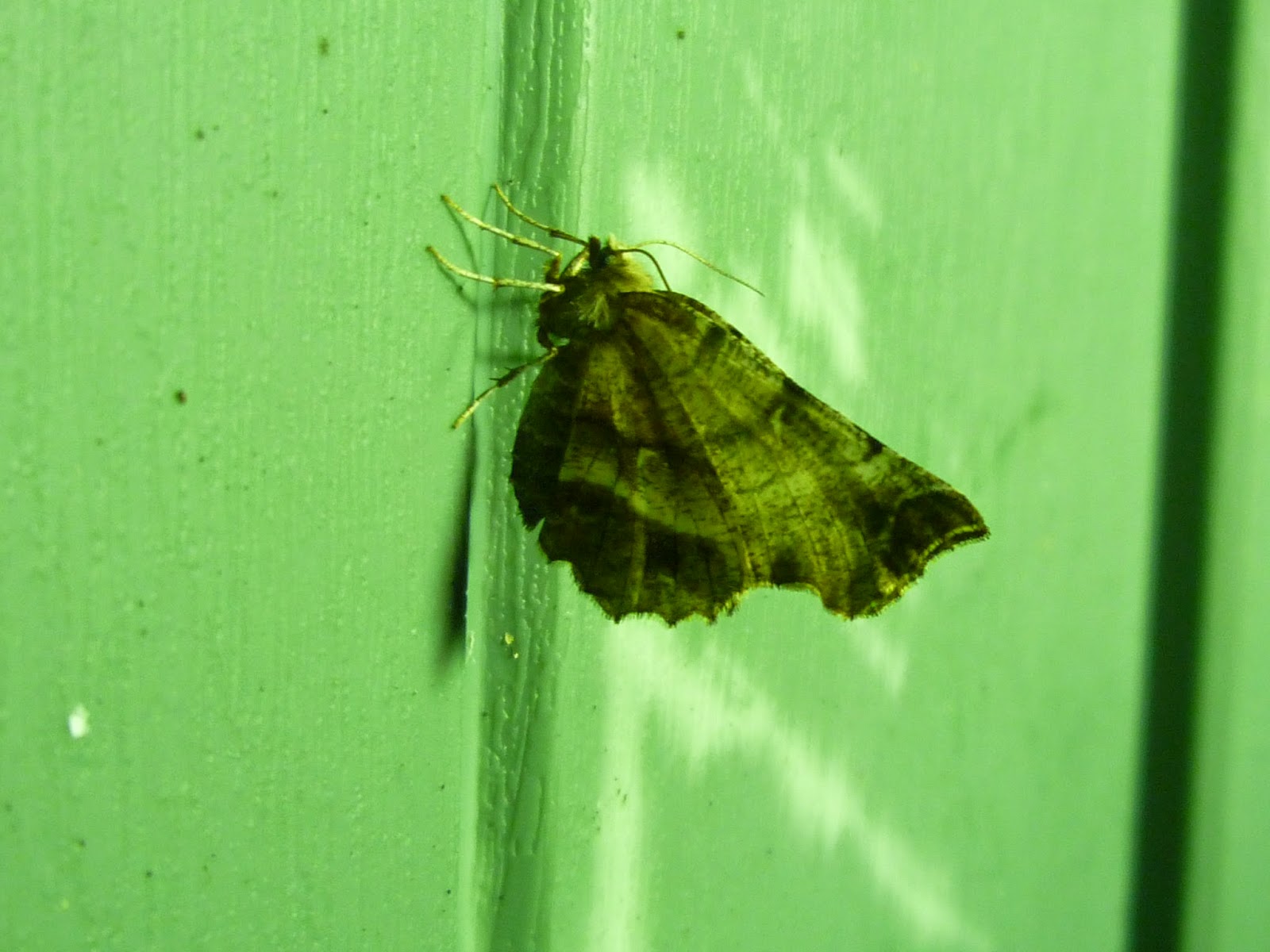 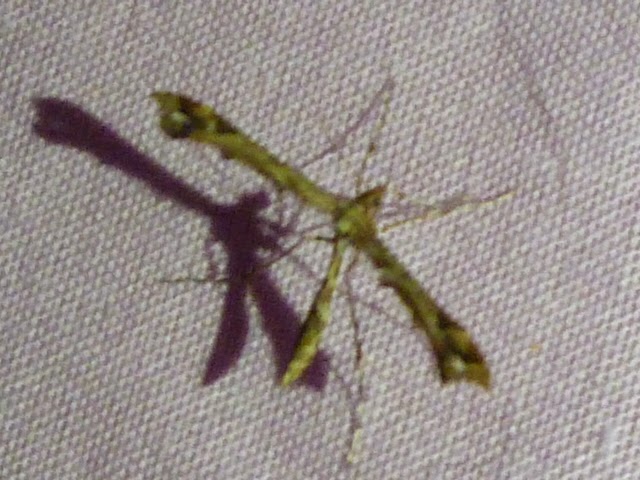 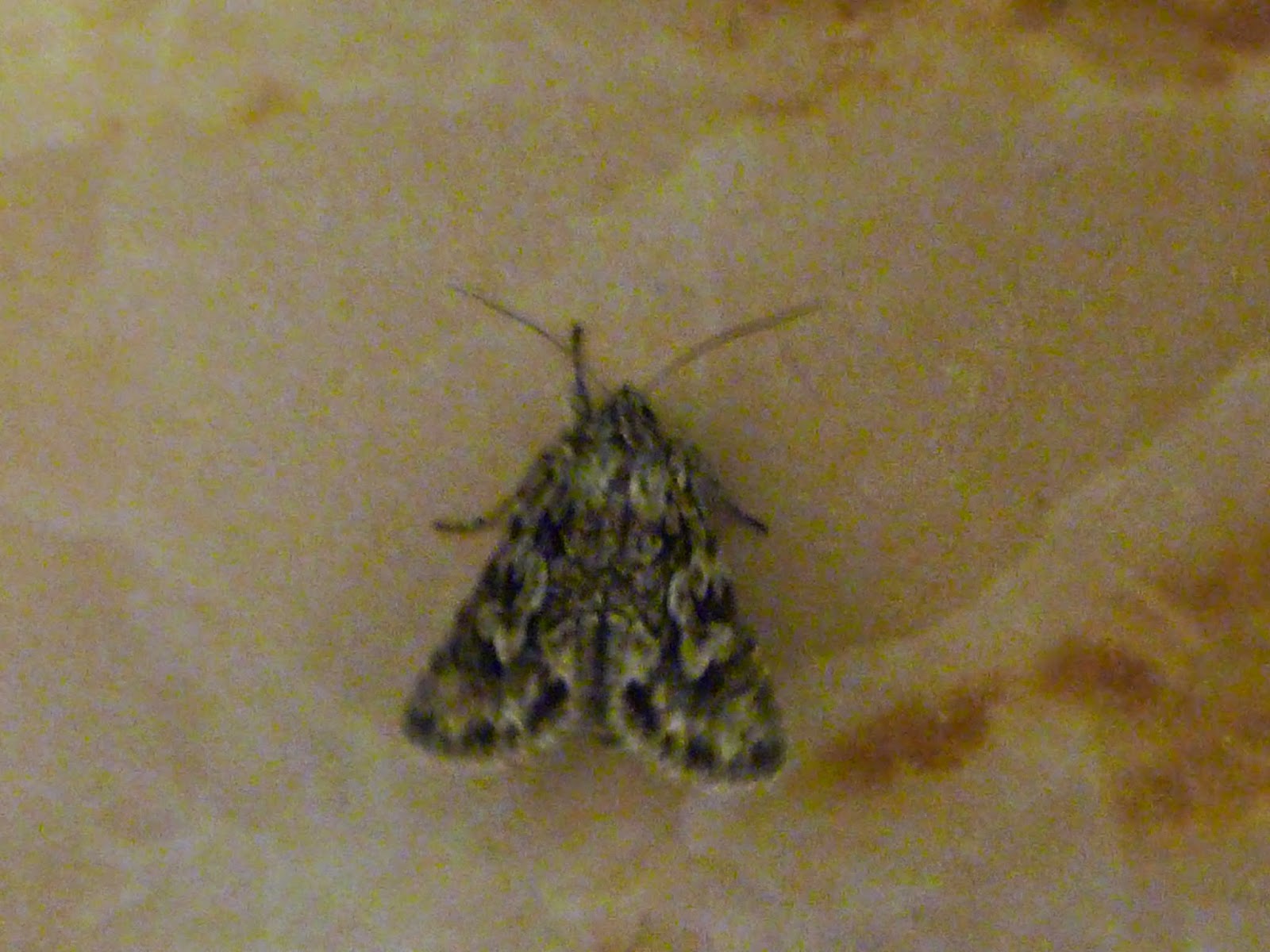 I thought today's title should give you some idea of what I got up to at Linacre yesterday morning, so I hope it does exactly that.

First up, the ringing. I met at 05.45am with 4 other members of the Group for a mist netting session. When we arrived, it was zero degrees and there was a heavy frost covering the Cowslips and Red Campion. The sun soon came up, the frost melted, and we began to catch birds in the nets. First bird of the day was a Nuthatch, our first for Linacre this year. We also caught another one later on. Blackcaps seemed to be everywhere this morning, and we managed to catch 3 different birds. A Whitethroat (Year Tick) was heard singing and seen a short distance from the nets, but wasn't caught. The final migrant of the day was Chiffchaff, of which we caught 3, including a retrap from last year. We also managed a stunning male Bullfinch, several Dunnocks, Robins, a female Chaffinch, a male Blackbird  and Great Tits.

After the ringing finished at about 9.30am I decided to do a "quick" round of the boxes. Two and  a half hours later I'd been round all the tit boxes and had recorded 34 active nests with eggs and/or sitting adults, an increase of 10 nests since my last visit. This number is an occupancy rate of 39%, up from 29% on my last visit (see here). Very pleased to say the least! As before, all the nests were Blue or Great Tits, and there was still no sign of any Pied Flycatchers. Whilst walking around the site I also managed to spot a Grey Wagtail nest with 4 eggs, and saw a female Chaffinch carrying food, which is the first time I've recorded proof that Chaffinches actually breed on site. Other evidence of breeding today included the  Coot nest on the top reservoir which contained at least 1 small young today, 3 broods of Mallard (1,1 and 7), and the 2 Great-crested Grebe nests which are still being incubated.

The last item on my title today is a new insect. The insect in question is a species of ladybird; the Eyed Ladybird. As you can see from this link, this insect is found in conifer woodlands, which is exactly where I found today's specimen, so it should be relatively common at Linacre. I'll have to keep my eyes peeled for more examples over the summer. 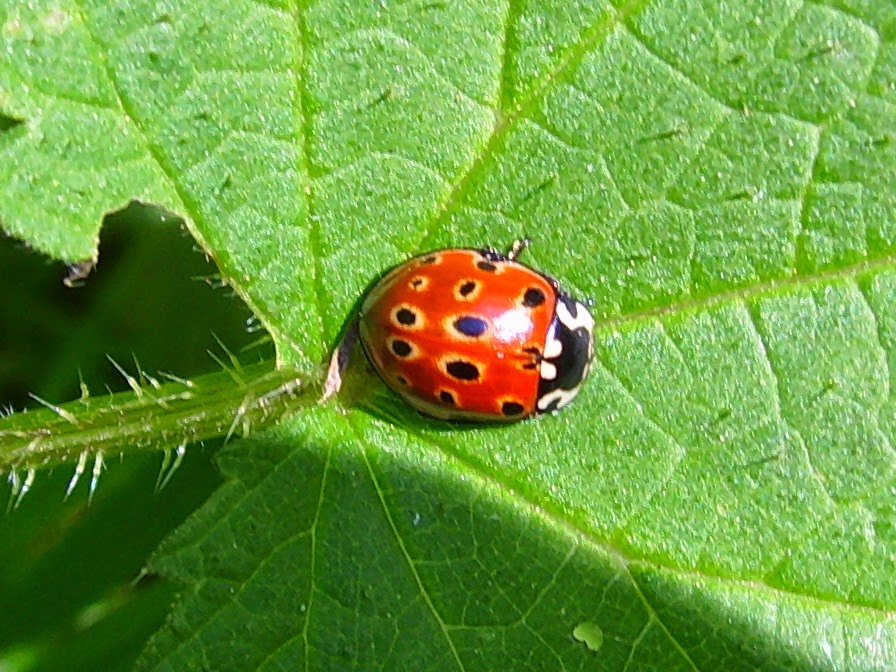 Year List update:
142 - Whitethroat
Posted by Linacreblogger at Sunday, May 04, 2014 No comments: