My last visit of the month to Linacre. Quite a nice morning, with clear skies and little wind. Several bird species were singing and  a good count of Goosander and Mandarin Ducks was nice to see.

The visit started well when 2 Common Buzzards were spotted feeding on the fields by the main entrance. Feeding alongside these were 18 Black-headed Gulls, which had increased to 29 by the end of the walk. Interestingly, most of the gulls were last year's juvenile birds, with just a few adult birds present. Perhaps the other adults have already set off back to their breeding grounds? A Lesser Black-backed Gull was also spotted flying east over the middle reservoir, which is the first record this year. 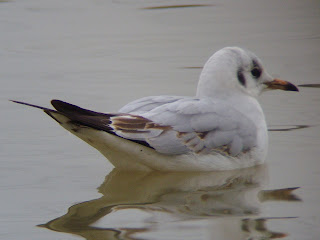 The woodland birds were in good voice with Goldcrest, Great Tit, Dunnock, Wren, Chaffinch, Nuthatch and Song Thrush all singing. Siskin were heard in the Larch woods north of the middle reservoir, where a Sparrowhawk was also seen soaring over the woods.

Finally another sign of spring  included the first leaves of Wild Garlic or Ramsons pushing their way through the soil.
Posted by Linacreblogger at Sunday, February 27, 2011 No comments:

As promised back in December, see here, I carried out the second winter visit for my Bird Atlas square this morning. Despite a few rain showers and a fall in the mud(!) I managed to see 27 species of birds including a great count of 23 Chaffinch, including many singing males. Other good news was the number of singing Song Thrushes, 20 in total, and a lovely flock of over 30 Redwing. 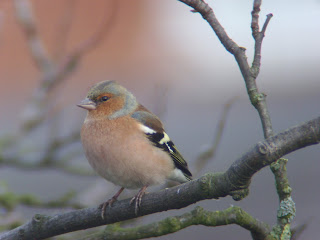 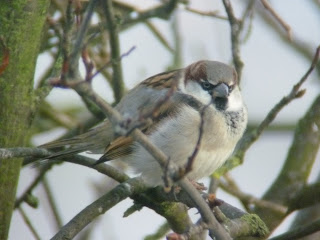 House Sparrow
The most worrying record of this walk, however, was just 1 singing Wren. Possibly a result of the bad weather? Hopefully this will have changed  in time for the summer walk in April. I'll let you know.
Posted by Linacreblogger at Saturday, February 26, 2011 No comments:

I always like to get at least one day's proper birdwatching in during the holidays, so I decided to go and explore a part of the world I rarely visit, namely North Lincolnshire, along the south side of the River Humber.

First stop of the day was Barton upon Humber Gravel Pits. A pair of Long-tailed Ducks had been reported here, but despite a good hour's searching I couldn't locate either bird! Instead I managed to get a few "year ticks" with half a dozen Gadwall, a couple of Shoveler, approximately 40 Pochard and a fly-by Kingfisher. Also present on the banks of the river were Oystercatcher, 30+ Curlew and Shelduck. 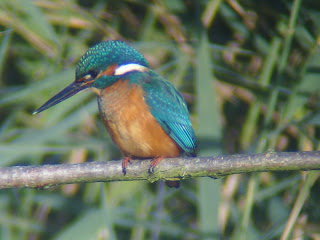 Kingfisher
Next stop was the cement works at South Ferriby, about 5 miles to the west and again on the banks of the River Humber. A juvenile Rough-legged Buzzard has spent the winter in this area and, for some reason, likes this particular patch of land. Presumably a good supply of voles is more important to it than beautiful scenery! Anyway, as is normal with this species, the bird spends alot of time sitting on the floor and today was no exception. It was eventually located about 800m away from the road, sat on the floor preening. Despite my best efforts I couldn't get a decent photo, but here is a link so you can see other people's efforts. My first "lifer" of 2011!!! As well as this great bird, I also managed to pick up 3 Marsh Harrier, including a pair displaying, 100+ Canada Geese and about 50 Pink-footed Geese feeding on Read's Island.
My final destination today was another spot, again, only about 5 miles away, called Worlaby Carr. It has become quite well  known in the birding world recently as an excellent spot to see and photograph Short-eared Owl, during the winter months. I arrived at 3pm and 4 birds were already flying around hunting. I dropped lucky and managed to photograph one sat on a post. Although some distance away, it is possible to make out its near horizontal stance and whiteish plumage. A great bird and wonderful "year tick"! 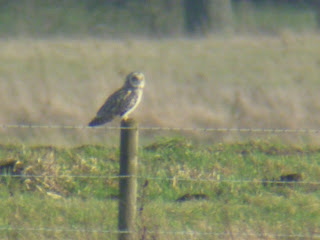 Short-eared Owl
Posted by Linacreblogger at Saturday, February 26, 2011 No comments:

Just been away for a few days to Wales with the family, so I thought I'd let you know how we got on. Though not principally a birding trip, we did manage to get some good "ticks".

First stop was Caernarfon where, amongst a few Redshank, Curlew, Mallard, Wigeon, 2 Mute Swans and Oystercatchers I spotted a group of 15 Red-breasted Mergansers fishing in the Menai Straits. 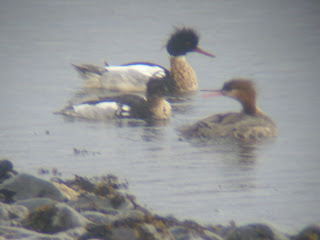 Red-breasted Mergansers
Also feeding on the sandy banks were a small flock of 6 Pale-bellied Brent Geese. 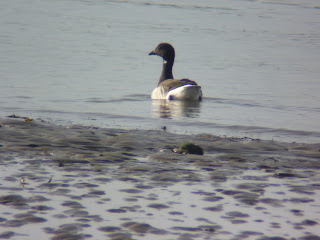 Next day saw us travel down to the south of the Llyn Penninsula where our first stop was the village of Portmerion. As well as looking around the interesting architecture we also managed to add Raven and Little Egret to the trip list.

Porthmadog was the next stop. Looking over the estuary several more Curlew were seen, along with Redshank, Wigeon, more Oystercatcher and a few Teal.

A short drive further down the coast brought us to Criccieth where 20+ Common Scoter and 1 winter plumage Great-crested Grebe were fishing in the bay. 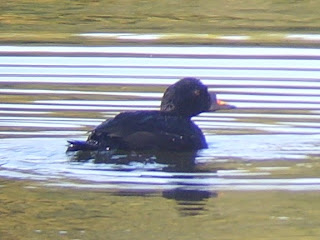 Common Scoter
The last stop of the day was Abersoch. Unfortunately the rain started here so the only real sightings were Great Black-backed, Herring and Lesser Black-backed Gulls loafing, swimming and preening in the river on the beach. Nice to get all three species together in one photgraph. 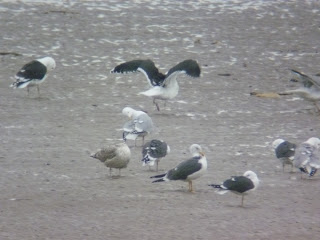 Posted by Linacreblogger at Tuesday, February 22, 2011 No comments:

Just a quick update with a new "year tick" from the garden in the shape of a Siskin. The bird, a male, was spotted with approximately 15 Goldfinch in the trees this morning and fed  for a bout 3 minutes before flying away. Managed to get just 1 half-decent shot through the branches and the rain!! 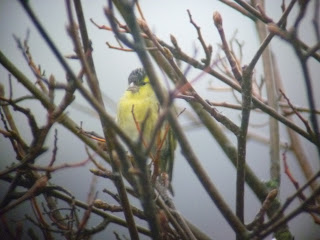 Siskin
Other birds present today were: the white Blackbird, 2 Dunnock, 3 House Sparrows, the nest-building Magpies,  ﻿2 Greenfinch and a Woodpigeon. All records were sent in to the BTO's Garden Birdwatch Scheme.
Posted by Linacreblogger at Sunday, February 13, 2011 No comments:

What started out as a cool, windy, overcast walk with very few birds ended up with some nice warm sunshine and some good sightings including a new species for the "Linacre List" - namely Tree Sparrow!!

Arriving at 8.30am in the bottom car park, our group of 8 people set off around the reservoirs ticking all the usual woodland species, including Blue, Great, Coal and Long-tailed Tit as well as Nuthatch, Woodpigeon and Magpie. Robins and Dunnocks were singing, as was a single Song Thrush, our first this year. 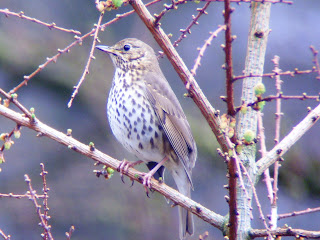 Song Thrush
Arriving at the middle reservoir, we were greeted by..... very little!! A few Mallard were present and both Moorhen and Coot were noted, but only in small numbers. Walking along the southern edge of the water, however, we soon started to get excited when we all heard a new call that none of us could identify. Scanning the overhanging trees we soon located the mystery bird when a Little Grebe appeared and continued its more usual "laughing" call. 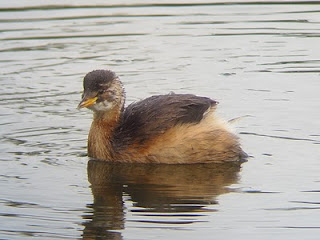 Little Grebe
We carried on up to the top reservoir where again the water was, at first sight, very quiet. After a few minutes though, we soon noted 2 Great-crested Grebes, including one in summer plumage. Treecreper was also added to the list here and a few more Mallard, Coot and Moorhen were also spotted. 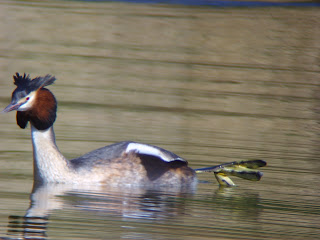 Great-crested Grebe
After walking around the top reservoir we took a short detour away from the reservoirs to locate a small flock of Tree Sparrows that had been reported earlier in the week at a farm just above Priestfield Wood. John, the finder of the birds, had kindly come along today (thanks John, good to see you again!) and, after a short walk, we soon located 2 birds perching in a hedgerow along with some House Sparrows and a small flock of Yellowhammer. Overhead a Buzzard was seen and a Great-spotted Woodpecker, was also spotted feeding on  some fat balls provided by the farm. Although not strictly within our recording area, we can note them down and keep an eye on this very interesting record. Another one for the BTO's Bird Atlas! 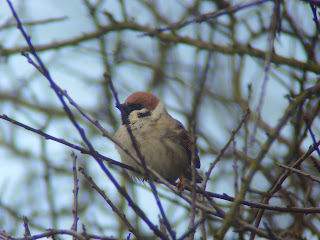 Tree Sparrow
Returning to the water we walked down to the bottom reservoir, where the sun came out and so did the birds!! The first sight was a lovely flock of  approximately 24 Mandarin Duck, followed quickly by 4 Goosander, 3 males and a female, another Little Grebe, 2 roosting Grey Herons, 1 fishing Cormorant and a good count of  24 Tufted Duck to finish off the walk.

As always, thanks alot to all the people who turned up again this month and fingers crossed for the first Chiffchaffs at next month's walk!! See you all on 12th March.
Posted by Linacreblogger at Saturday, February 12, 2011 No comments:

A blustery hour and a half walk around the reservoirs this morning produced one "first" for the year, namely Bullfinch and a great sight of 2 Cormorants, the second record this year. The Cormorants were perched on the raft on the top reservoir whilst the Bullfinch, a male, was sat calling quietly in a tree by the bottom reservoir. 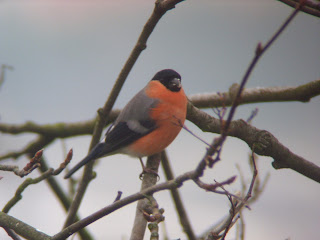 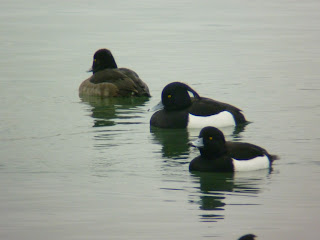 Tufted Duck
Early signs of Spring were evident with Hazel catkins out and a few woodland birds e.g. Great Tit and Robin starting to sing. 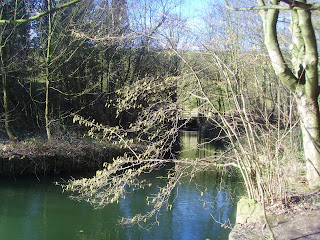 Hazel catkins by the middle reservoir
Posted by Linacreblogger at Sunday, February 06, 2011 No comments: