It's been a good year at Linacre, with 2 new species added to the list of birds seen (Shoveler and Shag). The first species,  was spotted on 4th November when 2 birds were reported on the Sheffield Bird Study Group website. The second species was found by me on 21st November, when 8 birds were recorded. They were reported on most days, up until the 3rd December, after which 5 and then 3 were seen until the end of the year. The record of 8 birds is the second highest count ever for Derbyshire, following 11 at Ogston Reservoir in 1993. 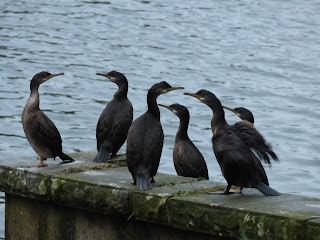 The BTO's WeBS count was carried out every month in 2015,sometimes by me, sometimes with my nephew, but mostly by several members of  Chesterfield RSPB Group, so many thanks to everyone who took part.

Wader records were low in 2015, with just 1 record of Woodcock in November. There were no records of Lapwing, Common Sandpiper,Oystercatcher, Curlew or Little Ringed Plover. Other birds not recorded in 2015 were: Green Woodpecker, Willow Tit, Lesser-spotted Woodpecker, Pied Flycatcher, Spotted Flycatcher, Garden Warbler, Linnet and Crossbill.

The final record of note for 2015 was my first ever December record of Chiffchaff. One bird was found feeding with a flock of Long-tailed Tits.
Posted by Linacreblogger at Thursday, December 31, 2015 No comments:

Whilst walking on the beach at Bamburgh, Northumberland this afternoon, Jayne and I spotted this Guillemot sitting in the dunes about 300m from the sea. 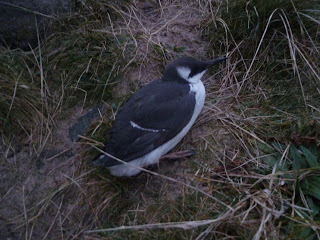 We presumed it had been blown in on the strong winds yesterday. I managed to pick it up and took it back down to the sea, where it swam off strongly. Hopefully it'll be ok.
Posted by Linacreblogger at Thursday, December 31, 2015 No comments:

So it's just gone 7pm on New Year's Eve, so I think it's safe to say I won't be adding any new birds to the "year list" for 2015. Following on from the Great Northern Diver earlier in the week, I've managed to see another 2 species, taking me to a grand total of 181 for the year. The last species for the year were Red-breasted Merganser and Common Scoter, both seen today in Northumberland. 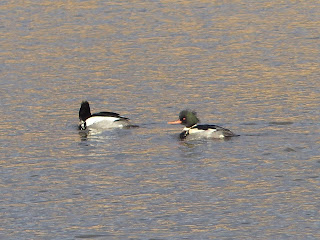 The Mergansers, 2 males and a female, were both seen on the River Coquet in Warkworth, along with 4 Eider Ducks, 2 Grey Herons, a male Goldeneye, Black-headed and Herring Gulls and Redshank. The Common Scoter, a female, was seen by Stag Rocks in Bamburgh, again accompanied by several Eider Ducks. 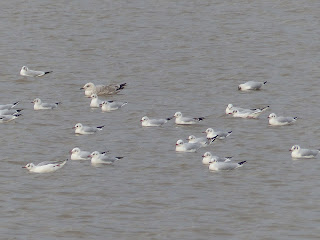 I was out at Carsington Water yesterday with Jayne, with the hope of adding another species to the "year list". As you can probably guess from the title of this post I got lucky, spotting one of the three Great Northern Divers that were present on the reservoir. No photo though, as it was too far out.

Whilst there, we also had a walk down to the bird hide where we spotted several Tree Sparrows on the feeders along with Chaffinches and a single Willow Tit. 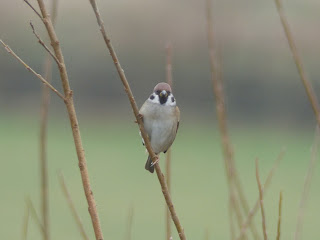 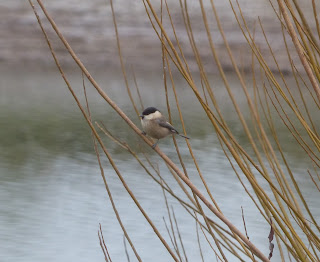 Posted by Linacreblogger at Monday, December 28, 2015 No comments:

I had a couple of hours down at Linacre yesterday morning. It was quite mild at 12 degrees, with a few drizzly showers and quite breezy. In the time I was there I walked around all 3 reservoirs.

The usual woodland birds were present, including a Buzzard that flew low over the middle reservoir, Wrens and Robins that were both singing and 1 Great-spotted Woodpecker.
Posted by Linacreblogger at Sunday, December 27, 2015 No comments:

I haven't had any new additions to the Year List for a while, so when news of a Waxwing at RSPB Old Moor came through on the BirdGuides website, I decided to have a drive up to hopefully get a view. Luckily, the weather was great on Sunday, with blue skies, and no rain, so I drove across, and spotted the bird perched in a tree above the main entrance.  Here are a couple of pictures. 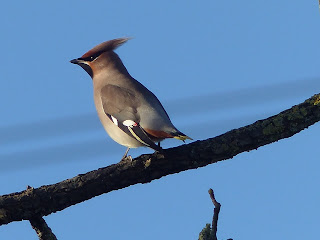 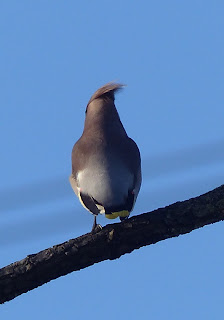 I'm going to stick my neck out and say that this bird is an adult female. It's a adult based on the fact that there are several "waxy appendages" on the secondaries (hence the name), something that first winter birds don't seem to possess. However, it appears to lack any white on the inner webs of the primaries., something that I would expect to see on an adult bird.  Also, the yellow on the end of the tail is quite broad. In a first winter bird, this would, apparently, be much narrower. I think it's female because of the relatively small numbers of "waxy tips", and also because the black throat patch has a rather diffuse edge. In a male bird, the edge is much sharper.

Anyway, that's my thoughts. If you agree or disagree, please let me know. I'm always willing to learn more!

I popped down to Linacre this morning to check on the Shags. There were still 3 juveniles on the middle reservoir.

Whilst there, I spotted a small flock of approximately 8 Long-tailed Tits flitting through the willows on the North side of the middle reservoir, and in amongst them was a Chiffchaff! This record is the first December sighting that I'm aware of, and therefore the latest ever Linacre record. Last year, we caught and  and ringed  a juvenile bird in November (see here), and there have also been  October records in 2013, 2012 and 2011, so it seems quite likely that this species over winters in small numbers. Now we just need to catch a bird in January to prove it!
Posted by Linacreblogger at Monday, December 21, 2015 No comments:

No ringing this weekend due to high winds, but instead I was down at Linacre with my nephew, to carry out this month's WeBS walk. It was a balmy 9 degrees, the sun was out and, out of a cool, stiff wind, it was quite pleasant. We were on site as it was getting light, for  just over 2 hours and recorded the following birds: Shag (3 juveniles on the middle reservoir), Cormorant (2), Mallard (87), Tufted Duck (20), Moorhen (9), Coot (3), Grey Wagtail (1), Little Grebe (1 on the middle reservoir), Grey Heron (1 sunning itself on the bottom reservoir), Black-headed Gull (45) and Kingfisher ( 1 heard on the middle reservoir, and 1 seen on the top reservoir- same bird?). 2 Lesser Black-backed Gulls flew over the car park as we were going. 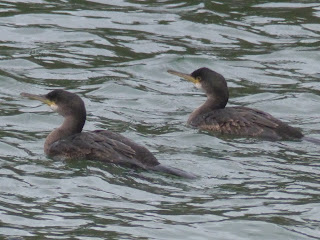 As well as the wildfowl, we also spotted this very confiding Kestrel that was perched and hunting from trees at the bottom of the bank by the middle reservoir. We got to within 5m of the bird, and saw it fly down, catch and eat  a couple of earthworms. The wing appears quite "droopy" in this picture, which could mean its damaged, and could possibly explain the bird's apparent "tameness". It did, however, fly down to the ground to catch the earthworms and then flew back to the tree, so hopefully it'll be okay. 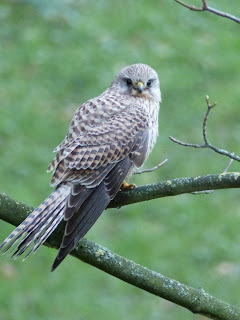 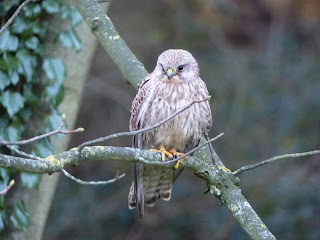 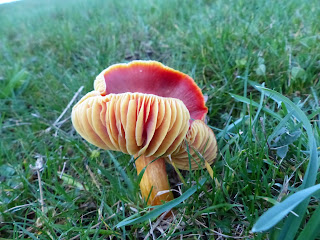 After 3 weekends of wind and rain, which has put pay to any ideas of ringing, I managed to get out again yesterday with 3 other members of The Group, to our private site in Sheffield. The site is a private garden with several apple trees, and the owner lets most of the apples fall to the ground. As a result, of the 45 birds processed, 15 (12 new and 3 retraps) were Blackbirds! Hopefully one of the longer -winged birds may end up in a garden in Sweden next Spring.

In other news, the Shags are still present at Linacre, but have decreased in number from 8 to 3. 5 juveniles, presumably the 5 that have "gone missing" from Linacre, have appeared at The Derbyshire Wildlife Trust's Carr Vale Reserve at Bolsover.
Posted by Linacreblogger at Monday, December 14, 2015 2 comments:

Back in November I was ringing  at Linacre with members of Sorby Breck Ringing Group when we caught, amongst other birds, a male Goldcrest that had been ringed elsewhere (a control). The details of this bird were sent off to the BTO, and today we heard back from them.

The bird in question had originally been ringed in Kilnsea, Spurn, East Yorkshire on 29th October 2015, weighing 5.1g. We controlled the bird  at Linacre on 22nd November 2015, having traveled 116km in 24 days. When we weighed it, it weighed 5.4g, so it had obviously found some good food here in Derbyshire!

The fact that the bird had been originally ringed at Kilnsea in October makes me pretty sure that it is an immigrant bird that had migrated across the North Sea. The BTO wrote an interesting article on their Demog Blog back in October about this year's Goldcrest influx, and the number of countries they'd come from (see here). Here's a link to the BTO's Ringing Report for Goldcrest from 2014. Our bird will now add be added to the database.

Hopefully, we'll be able to control it again during the winter, or perhaps it'll be controlled back in Scandinavia next spring. I'll let you know if we get any more details.
Posted by Linacreblogger at Wednesday, December 09, 2015 No comments:

Despite the strong winds (gusts up to 50 mph were forecast, and it definitely felt like that standing on the dam wall of the top reservoir!), I was down at Linacre this morning with my nephew, to check on the Shags.

When we arrived on site we got a little worried as we couldn't find any in their usual spot on the middle reservoir! Undeterred, we decided to walk around the other 2 reservoirs just in case they'd moved there. They hadn't (!), but we did count some of the commoner wildfowl and the Black-headed Gulls that were on site. Totals were: Mallard (84), Moorhen (9), Coot (3), Tufted Duck (30), Cormorant (4, including 2 perched up in the Beech trees on the bottom reservoir), Grey Wagtail (1) and Black-headed Gull (c.50). Here's a photo of a couple of Tufted Ducks from the bottom reservoir. I think the back bird is an adult female and the front bird is a young one, due to a much paler iris, and much less intense colouring, especially around the head. 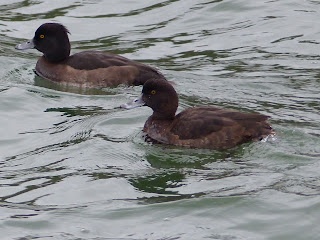 We returned to the middle reservoir after about an hour and were pleased to see 2 Shags back on the overflow. We grabbed a few pictures, and another 2 Shags were spotted fishing, taking the total to 4. 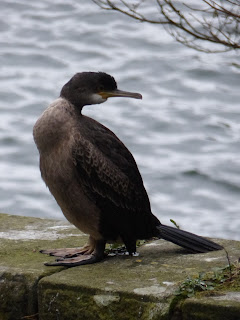 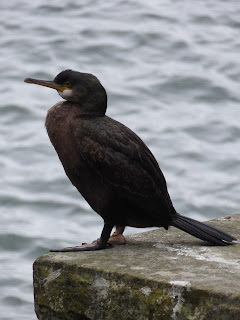 These were the 2 individual birds that were perching on the overflow this morning. Note how much paler the top bird is.

A Kingfisher was also heard, but not seen, and the winter plumaged Great-crested Grebe was still present. Luke spotted a Sparrowhawk, and a Common Buzzard was seen flying low over the bottom reservoir.
Posted by Linacreblogger at Saturday, December 05, 2015 No comments:

News of the Shags at Linacre have continued to come out on social media and the Bird Guides website throughout this week. This means they have now entered their 2nd month- one step nearer to 2016!

I've only been able to get down once this week, this evening, and I was very pleased to find 6 birds on the overflow again. I managed to get some better photos of the 6 birds, and a nice portrait shot of one on its own. 6 had increased to 8 by the time I left, but it was too dark to get a photo by then! 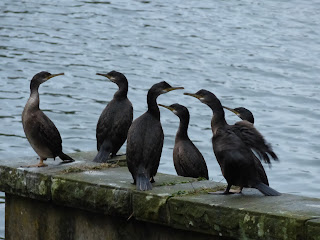 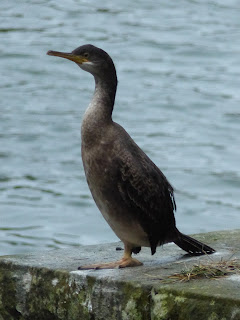 Whilst walking back to the car I  heard a Kingfisher calling and also heard a Tawny Owl just below the car park. The weather forecast isn't great for the weekend, but I'll try to get down again and get a shot of all 8 birds together.
Posted by Linacreblogger at Thursday, December 03, 2015 No comments: