Jayne and I have just had a couple of days in Keswick in the Lake District. During our time, we visited the Forestry Commission's Whinlatter Forest Park, hoping to see some Red Squirrels. Unfortunately, we drew a blank with the squirrels, but we did enjoy a lovely walk, and managed to spot some Crossbills (male and female), in the woodlands. 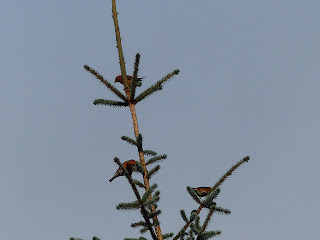 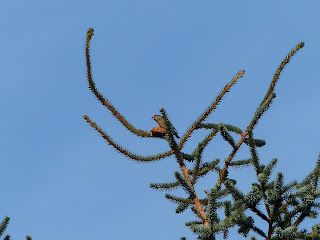 Here's a picture of one of the many waterfalls in the park, and a Common Gull that we saw feeding with dozens of Black-headed Gulls, Mallards, Canada and Greylag Geese on Derwentwater. 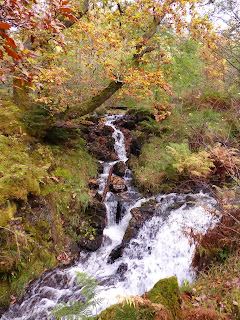 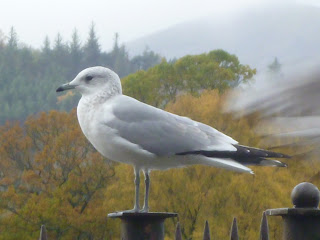 I've just been away with Jayne to the Lake District for a few days (more about that in a later post), and, on the way, we decided to pop into the RSPB's Leighton Moss reserve in Lancashire. 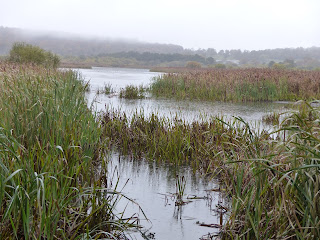 The main reason for our visit was to hopefully see some Bearded Tits that feed on the "grit trays" at this time of the year. The grit trays are provided to help the birds digest the fibrous reed seeds that they eat during the winter months. See details of a color ringing scheme carried out by North Lancashire Ringing Group here. Here's a picture of the grit trays, minus the birds! 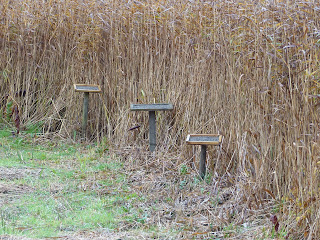 After failing to see the Beardies, we walked on down to the Lower Hide, where we had a little more luck, seeing our first ever English Otter (no photos though, as it was too far out), and one of at least 2 Great White Egrets, that were present on the reserve. As you can see from the photo, the bird was also quite a way out, but least it flew up onto a dead tree for us. 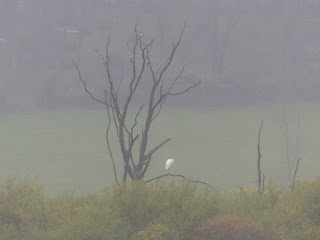 Other birds seen during our visit were: Gadwall, Shoveler, Mallard, Grey Heron and Pintail.
Posted by Linacreblogger at Friday, October 30, 2015 No comments:

Linacre in the Mist

I'd seen the weather forecast was set for mist and fog, but I thought I'd have a short walk around Linacre anyway. When I arrived, this is what greeted me! 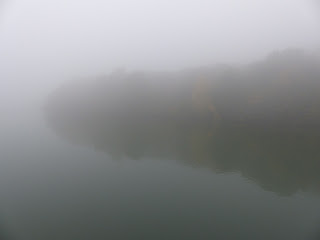 I decided not to walk around, but instead stood on the dam wall  by the middle reservoir for about half an hour, to see what I could hear! Surprisingly, in that short space of time I heard, but didn't see, the following species: Kingfisher, Wren, Grey Heron, Bullfinch, Chaffinch, Blue and Great Tit, Nuthatch, Grey Wagtail and Mandarin Duck.

As I was leaving, the fog had lifted enough for me to make out  a few species, including 9 Black-headed Gulls (made up of 7 adults and  a couple of 1st winter birds, like this one), half a dozen Mallards, 2 Coots and a Grey Wagtail that was feeding in the overflow channel. Not too bad, for a very misty start. 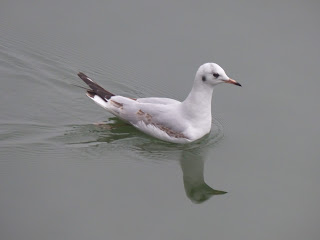 I was down at Linacre again this morning carrying out this month's WeBS count. Compared to last week's counts, it was obvious that there had been an influx of birds, as numbers for most species had increased. In addition, I also recorded the first Redwings of the autumn/winter, with a minimum of 30 flying over the site in several groups, and at least half a dozen feeding in the Rowan trees by the top reservoir, with 2 Mistle Thrushes.

Here's a few photos from this morning's visit. 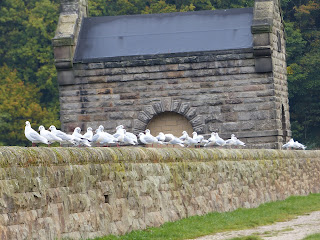 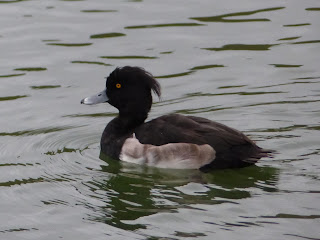 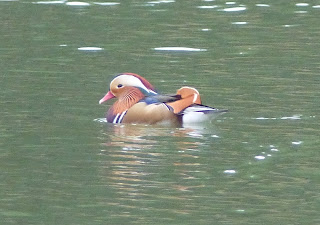 After yesterday's ringing session at Linacre, I thought it was about time I got down there again to do some "birding". In the end, I had a couple of hours from 7- 9am, and recorded some decent birds!

The "best" birds of the session were a flock of 7 Wigeon that were on the top reservoir this morning. Since I started recording the bird life of Linacre Reservoirs in 2006, I've only had 9 previous records of this species, so a flock of this size was quite a surprise. They were quite vocal, but unfortunately for me and my camera, they stubbornly refused to move from the centre of the reservoir, so the only half decent record shot I could get of 6 of them, was this one (sorry!!) 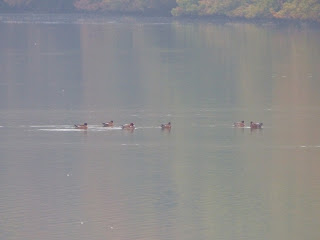 Along with the Wigeon, I also managed to see a couple of Teal. Again, this species is pretty uncommon at Linacre, with just 16 previous records (since 2006). There 2 birds present on the middle reservoir today, and I managed to get this awful "record shot". I think it's a juvenile bird, due to the yellowy, orange colouration on the beak. 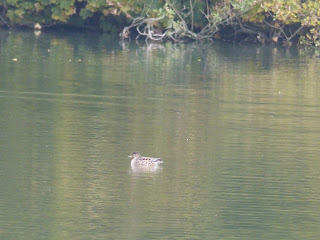 More cooperative and photogenic were the first returning Black-headed Gulls of the winter. There were 6 birds present today, and they allowed me to get much closer and get a few photos, including this one that was "yawning". Do birds yawn?? 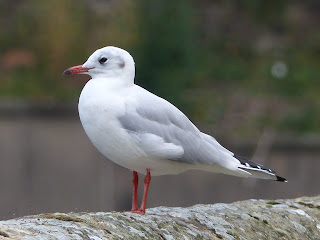 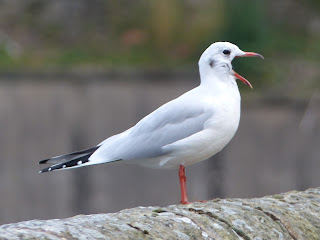 As well as the water birds there were also good numbers of  birds in the woods, including a lovely mixed tit flock of Blue, Great, Coal and Long-tailed Tits. Siskins were also heard, but not seen. A Mistle Thrush was feeding on Rowan berries by the top reservoir, where a Kestrel was being harassed by a Carrion Crow.
Posted by Linacreblogger at Sunday, October 11, 2015 No comments:

It was quite quiet around the ringing site, but we did also record Nuthatch (heard), Grey Wagtail (2 flew over), Long-tailed Tit (a small flock flying around), Jay (2 heard) and Kestrel (1 seen flying, being mobbed by the local Carrion Crows and perched up in trees).
Posted by Linacreblogger at Saturday, October 10, 2015 No comments:

After a morning's ringing, I drove across to Thrybergh Country Park, with Jayne, to see a Black Tern that had been reported on the Bird Guides website. I haven't seen Black Tern for many years, and this is my first blog post mentioning this species.

The bird in question was "showing well" throughout our visit, but was, unfortunately, too far out to get a photo. It was constantly flying around, picking insects off the surface of the water and being mobbed by the Black-headed Gulls. A great bird to see, and a nice addition to the "Year List".

I was in London with Jayne, for the weekend, and whilst there I managed to add a couple more birds to the Year List, namely Ring-necked Parakeet and Red-crested Pochard. 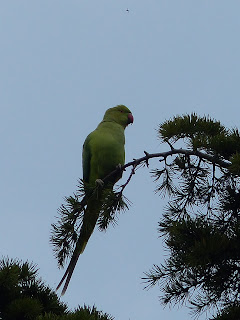 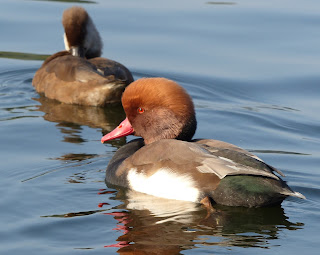 Both birds were seen and heard in Kensington Gardens and on The Serpentine. Along with these 2 species, we also heard Cetti's Warbler and Common Buzzard, both new species for me in London, along with Mallards, Tufted Duck, Canada, Egyptian and Greylag Geese, Little and Great-crested Grebes, Grey Heron, Black-headed, Lesser Black-backed and Herring Gulls, Cormorant, Grey Wagtail and Pochard.