Ever since I began subscribing  to the Birdguides website about 5 years ago my knowledge of rarer birds in Britain has increased greatly. Although I don't consider my self a full blown twitcher, I do sometimes like to travel around looking at particular birds. So it was then that I set off for Preston, Lancashire this morning to see if I could catch up with a lovely juvenile Iceland Gull that has been seen in the Docklands area of the city.
After a very uneventful 2 hour trip across the Pennines I arrived at Preston Docks at approximately 8.30am. 4 local birders were already present on site and they very kindly put me straight onto the bird.It was sat on the ice about 20m out showing very well. 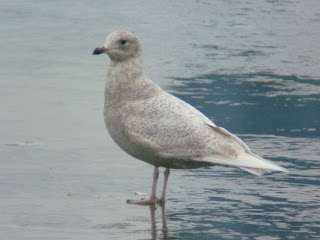 Iceland Gull
As you can see on the photo, the white primary feathers are very noticeable on this juvenile bird, hence the description as a "white-winged gull". A very nice bird and a great way to end my birding year.
Posted by Linacreblogger at Thursday, December 30, 2010 No comments:

Another day, another entry!! Don't worry it won't last. As soon as I get back to work the birding will stop, or at least become alot less frequent, and the blogging will go the same way. So let's make the most of it while it lasts.

This morning was grey and misty, not exactly the greatest incentive to get out of bed, but as I'd volunteered to carry out 4 walks for the BTO's Bird Atlas, and the first had top be completed by the end of December, I thought I'd better get out and get it done. I'm so glad I did, because, as it came light the mist started to clear and although I wouldn't go as far as to say it was sunny, it was definately a very pleasant walk and a good way to pass 2 hours of the holiday.

This year's walk took place in a1km square located around Old Brampton, Chesterfield. I started off walking past Ashgate Hospice and got my first birds of the day, a small flock of 6 Redwing. These were soon joined on the list by 4 Fieldfare and the first singing bird, a Robin. As I left the main road bird numbers increased and I soon recorded my first Nuthatch, Great-spotted Woodpecker and Dunnock. Rooks and Jackdaws were numerous, both species prospecting for nest sites, the former in the tops of the mature trees by the bridle path and the latter around the many chimney pots on the houses. The walk continued over countryside, through several fields, including some that had only recently been spread with slurry- very smelly!! The smelly field were good for birds though with a group of 20 Black-headed Gulls and 3 Lapwings busy feeding on them. After a short time on Chatsworth Road which provided me with my first Collared Doves of the day, I walked back down Storrs Road and Old Road to rejoin the car. The last new bird of the walk was a gorgeous Jay, which flew out of the woodlands just in front of me. Lovely!!

As mentioned above, this walk was the first of 4 for this particular square. I will be doing another in February 2011 and then 2 during the breeding season to see which other species use this part of the countryside. The results will be added to the BTO website and will feed into the new Breeding and Wintering Atlas that covers the whole of Great Britain. If you fancy having a go at this type of bird survey work give the website a look. I can really recommend it.
Posted by Linacreblogger at Wednesday, December 29, 2010 No comments:

The great thing about having a local patch is that you tend, after a year or two, to know which birds to expect at which times of the year and, with some species, even which area of the site to look in. This means that when you turn up for a short walk around at the end of December you expect to see the usual wildfowl a few gulls and the odd Goosander if you're very lucky. This was exactly the case for me this afternoon, until I started counting the Black-headed gulls that were standing, preening on the ice. Suddently in amongst them I noticed a much larger gull with a light grey back and a large, yellow beak with a red spot on the lower mandible. Straight away I knew this was an adult Herring Gull, a first for me at this site!!! 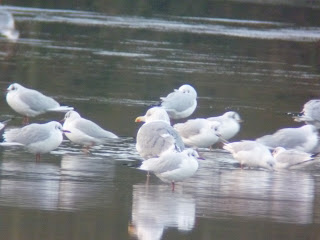 I managed to grab  a few reord shots, before the bird took flight and flew off in anortherly direction, never to be seen again!! Whilst returning to the car park several other large gulls were seen flying over the reservoirs, presumably going to roost elsewhere. Where????

Despite the weather having warmed up greatly today, 4 degrees this afternoon, there was still plenty of ice on the reservoirs and some amazing ice sculptures on the overflow channels, just like this one. 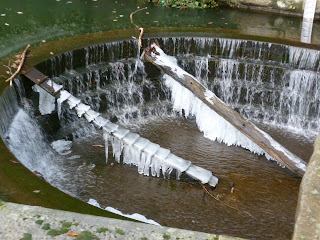 Posted by Linacreblogger at Tuesday, December 28, 2010 No comments:

With a break from school and more time at home due to the Chritsmas celebrations I've been concentrating my birdwatching efforts on the back garden this week. Because we feed the birds everyday, throughout the year, we usually get a good number of species and individual birds coming in. In fact, during the present cold conditions we've had much higher numbers of common birds than usual and a few nice surprises!! 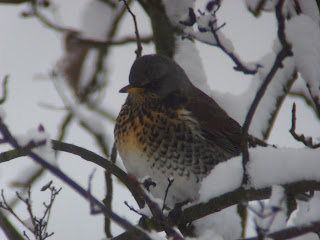 Blackbird numbers have increased to 18 and they've recently been joined by both Redwing (4) and Fieldfare (6). The Robins have become less territorial and have even been seen tolerating each other, Starlings have returned to feast on the mealworms provided and Goldfinch numbers have increased to 20+. Blue, Great and Coal Tits rush in to grab a sunflower heart and Greenfinch and Chaffinch also take advantage of the food on offer. A Song Thrush has been seen on just one ocassion and Woodpigeon and Collared Dove visit everyday.

One particular bird that has been present in the garden since about September and which is very easy to recognise is a male Blackbird with a great deal of white feathers in his plumage. I mangaed to get a few shots of him recently, one of which is shown below. It will be interesting to see if he stays into the summer or whether he leaves in the spring. I'll keep you informed. 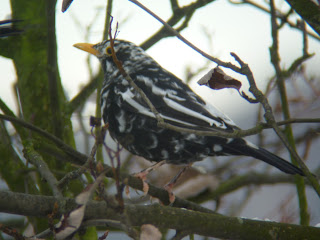 To make all this garden birdwatching even more fun I take part in the BTO's Garden Birdwatch Scheme, whereby I record all the birds using the garden each week and submit the records via their website. I've been doing this since 1999 and it's great to look back over the year's records and compare the results. Why not click on the above link and take part in 2011?
Posted by Linacreblogger at Monday, December 27, 2010 No comments:

Following another week of sub zero temperatures and a few snow flurries, the reservoirs were all but completly frozen over with just one small patch of open water on each of the three reservoirs. 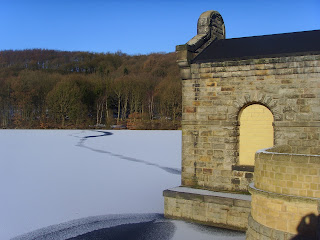 As a result there were very few waterbirds present, but those that were, were pretty easy to see and count. Mallard numbers were around 45, including 30 which came to seed on the top reservoir. 6 Moorhen also came to the seed as did 4 Coots. 35 Black-headed Gulls were on the bottom reservoir along with 16 Tufted Duck, 12 Mandarin Ducks and 3 juvenile Mute Swans, a first for me at Linacre this year! A Grey Wagtail was heard but not seen. 2 Little Grebes were seen, including 1 which was fishing in the pool by the bridge on the top reservoir. 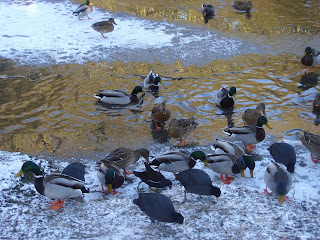 Small birds including Nuthatch, Blue, Long-tailed and Great Tit, Chaffinch and Goldfinch were heard and seen, as were Crow and Jay. 1 Fieldfare was seen flying over the bottom reservoir.
Posted by Linacreblogger at Friday, December 24, 2010 No comments:

Following news of a Bittern at this Derbyshire Wildlife Trust reserve near Chesterfield yesterday, I decided to have an hour down here this morning. The site was very snowy and more or less completely frozen over, with the exception of the Duck Marsh. I wasn't lucky enough to see the Bittern, but there were 14 Teal, 20 Black-headed Gull, 2 Common Gull, 1 Snipe, 6 Mallard, 1 Grey Heron, 1 Little Grebe and several Coot and Moorhen.

On the way back home I stopped off at Apperknowle and managed to see a small covey of 7 Grey Partridge feeding in a snowy field. A great site and my first record for the year!! Record sent into the Derbyshire Ornithological Society for inclusion in their annual Bird report. 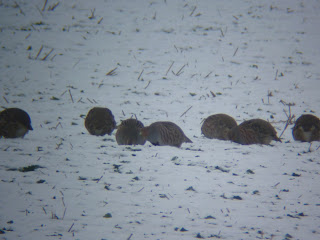 Posted by Linacreblogger at Wednesday, December 22, 2010 No comments:

Once a month a group of friends and I from the Chesterfield RSPB Group take part in the British Trust for Ornithology's (BTO's) Wetland Bird Survey (WeBS). This involves meeting in the bottom car park at 8.30am and walking around all three reservoirs for between 2 and 3 hours looking at and recording all the waterbirds present. We send off the data to the BTO who collect it and that of several thousand other sites around the UK and Northern Ireland to get an idea of what happening with Britain's waterbirds. As well as being a great morning's birding, it's also nice to know that we're providing some useful information to help birds around the country!

This month's walk began with temperatures of minus 3 and ended with a balmy minus 1!! A total of 8 species of waterbird were seen, which is about average for this relatively small inland waterway and not too disappointing given that most of the lower and middle reservoirs were iced over. Mallard numbers were average at 47, Tufted Duck were okay with 34, 1 Grey Heron was seen, as was 1 Little Grebe. Coot and Moorhen were also present, 10 and 3 respectively, and 23 Black-headed Gull were loafing about on the ice. The highlight of today's walk, however, was the sight of 4 Teal (2 male and 2 female) swimming about on the top reservoir, a real rarity here with only 2 previous sightings this year!!! 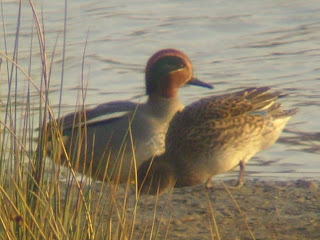 Next month's walk will take place on the 15th January. Who know's what will be seen???
Posted by Linacreblogger at Sunday, December 19, 2010 No comments:

Hello and welcome to my new blog. The main purpose of this blog is to let you know about my birdwatching activities at Linacre Reservoirs in Derbyshire, Great Britain. I will also keep you posted with any other birds that I see and photograph around the country and abroad in 2011.

To get started I've put in this picture  of some beautiful Starlings that have been visiting the garden during the recent cold snap. Hope you like them!!! 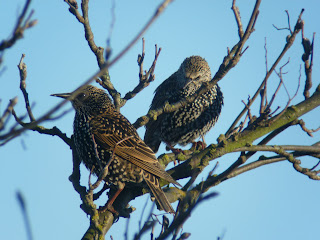 Posted by Linacreblogger at Saturday, December 18, 2010 No comments: