We haven't yet had a great deal of decent sunny weather this summer, so, with the sun out, and a very decent temperature of 25 degrees today, I thought it was time to head over to Lindrick Dale near Worksop, to have a look at  the butterflies there.

I arrived at about 10am and straight away saw good numbers of Marbled White (15+), Dark Green Fritillary (c.20) and Silver-studded Blue (10+ males, no females). 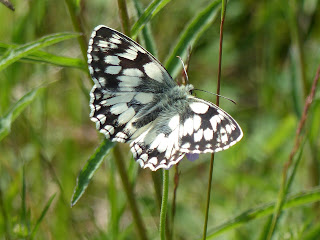 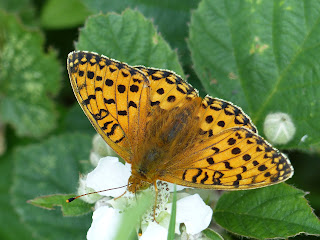 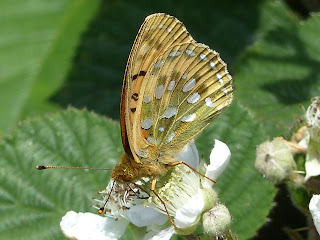 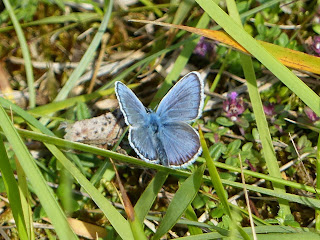 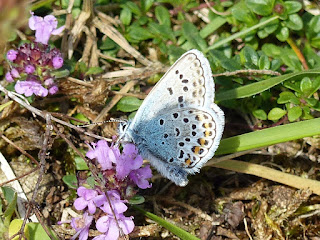 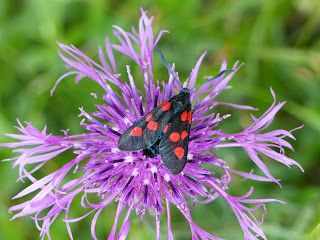 Flowers seen were: Bladder Campion and 3 types of orchid: Bee (3), Common Spotted and Pyramidal.
Posted by Linacreblogger at Saturday, June 29, 2019 No comments:

On Friday I was out with the Chesterfield RSPB Group at Clumber Park for the annual Nightjar Walk.

We started off at the Chapel, where we saw a variety of waterbirds, including a fly-over Little Egret, and dozens of juvenile Canada and Greylag Geese. Passerines were few and far between, but we did drop very lucky when 3 Woodlarks flew over from South Lawn and landed on the grass, approximately 30m away from us! Luke managed to get a decent shot of one of the birds. 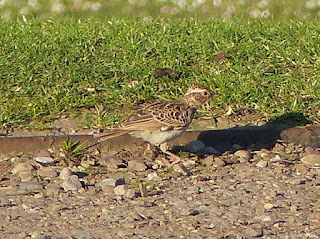 Later, we drove across to our traditional site for the Nightjars and Woodcock, where we saw both species.

I haven't done any ringing in my garden since March, so this morning I decided to get the net out for a few hours (05:45 - 09.00). My main target was to try and catch some of the 20ish juvenile Starlings that have been feeding daily in the garden, along with several ringed adult birds. By the end of the session I'd caught 17 birds, including 8 Starlings (6 new birds and 2 ringed birds), 2 juvenile Dunnocks, 4 Greenfinches (2 adults and 2 juveniles), 1 adult Blackbird and 2 adult House Sparrows.

I was able to sex the juvenile Starlings using their eye colour. The male birds have an all dark eye, whereas the females have a pale ring around the eye. 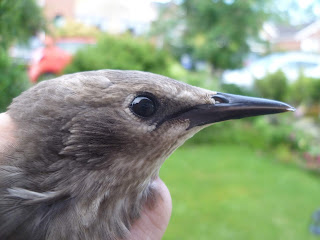 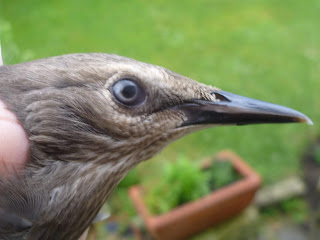 The two ringed Starlings that I managed to catch were very interesting. The first bird was an adult female with a very well developed brood patch (indicating breeding), and, when I read the ring, turned out to be a bird I'd caught in the garden in 20th May 2018. It had a brood patch then too.

The second ringed bird was a juvenile, and turned out to be one of the four pulli I'd ringed in May in the nestbox on the side of my house (see here). This bird was the only one of the 6 juveniles caught this morning to have started its post juvenile moult, as seen in this picture below. 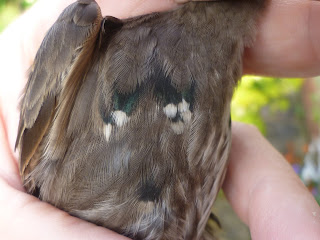 Starling with a few adult feathers

It could also be sexed as a female, using the eye colour. 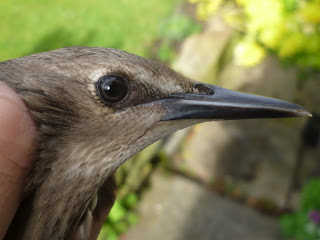 Last Sunday I got up early and had a couple of hours walking around all 3 reservoirs of Linacre. It was a lovely morning, and I managed to record a new species for June, along with lots of great breeding records.

I started by the middle reservoir where I saw 3 adult Lesser Black-backed Gulls and a 2nd or 3rd calendar year Herring Gull ( my first June record, and only my 5th ever Linacre record, following records in 2010, 2014, 2016 and 2017). Also present was a pair of Great-crested Grebes with 3 chicks and 2 Grey Wagtails (1 adult and 1 juvenile). 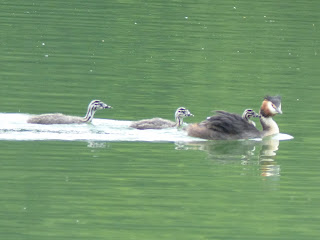 Away from the water the brood of 7 Pied Flycatchers were old enough to ring and a few insects were also seen, namely Red Admiral (1), Chimney Sweeper (a day flying moth) and a hoverfly that I think is a Scaeva pyrasti. 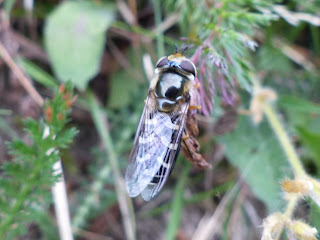 Scaeva pyrasti?
Posted by Linacreblogger at Saturday, June 08, 2019 No comments:

Jayne and I spent a few hours at RSPB Old Moor yesterday. The weather wasn't great, but we still managed to see some good insects (and a few birds too!).

The first insect of the day was a Dingy Skipper. 2 were seen including this individual. 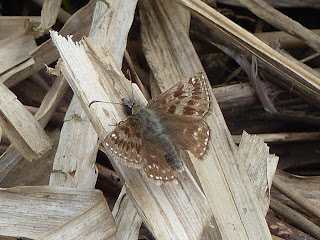 Other butterflies seen were: Common Blue and Green-veined White. 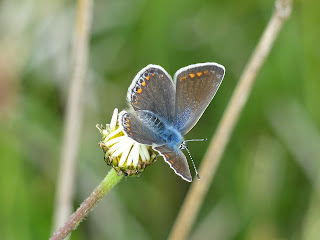 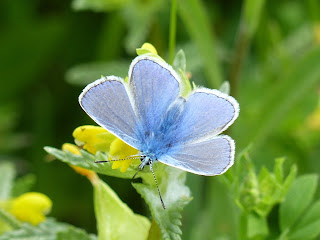 Common Blue Butterfly (female, above and male, below) 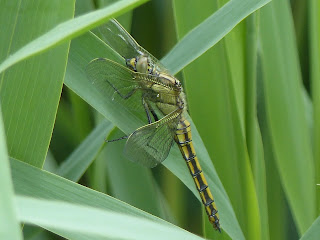 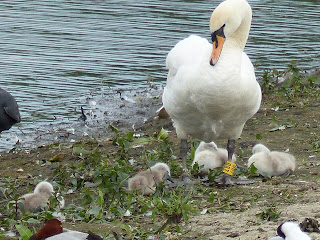 UPDATE: The Mute San 087 was ringed as a young bird at Ulley, 15km away, in September 2013, making it 6 years old this year. It has spent its entire life within South Yorkshire, being reported in Aldwarke, Rotherham, Thrybergh and Wath, before being reported at Old Moor in 2017 for the first time. Has it been here ever since??
Posted by Linacreblogger at Monday, June 03, 2019 No comments:

It was 20 degrees yesterday afternoon, so I went down to Linacre to have my first proper look for insects. I'm very glad I did, as I ended up recording 4 species I'd not seen before!

The first "new" species was a micro moth, Endothenia sp. Unfortunately, this moth can't be identified to species level without dissection (!), so it will have to remain just Endothenia sp! 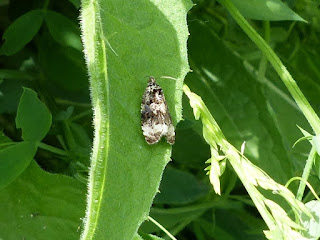 The second species was a macro moth, Brown Silver-line, which was seen in the ringing site. 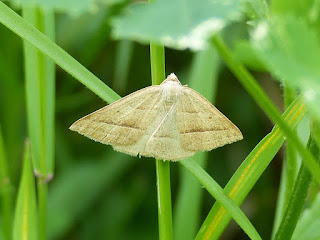 The 3rd species is a beetle with the great name of Swollen-thighed Beetle! You can see how it gets its name in this photo. 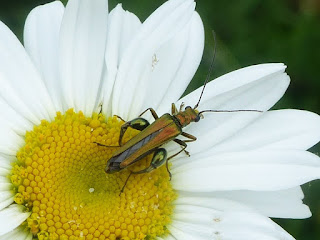 The 4th and final new species was a Blue Lacewing. 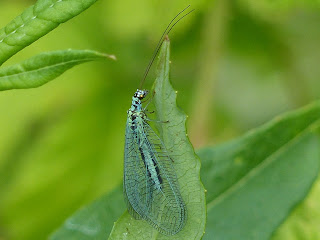 I last visited the Farne Islands in 2011 (see here), so, when deciding where to go away this year, Jayne and I decided to visit this group of islands off the Northumberland coast at the height of the breeding season. We visited on Friday 31st May, and, despite heavy rain for most of the visit (!), had an amazing time seeing all the birds at such close quarters.

We went across to the islands and spent about one and a half hours travelling around them (seeing Fulmar and Gannets), before landing on Inner Farne for an hour long visit. Whilst on the island we walked up through the Arctic Tern colony, passing the nesting birds (and being pecked by them). We also saw nesting Sandwich Terns, Eider Ducks, Black-headed Gulls, Shag, Guillemot, Razorbill and Puffin, all within touching distance of the paths - fantastic!! 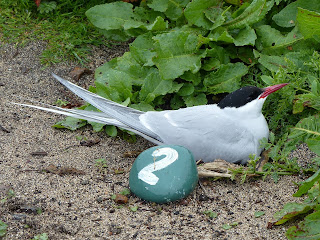 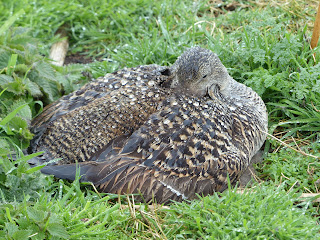 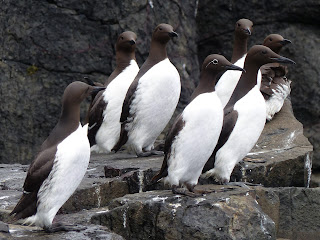 Guillemot (including a bridled individual) 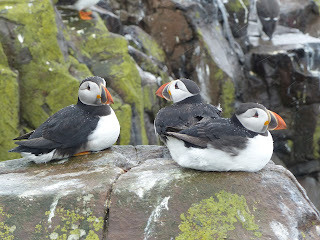 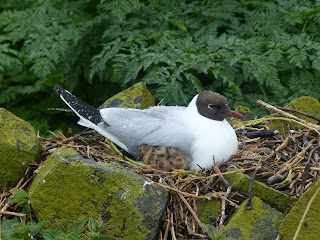