As well as the nestboxes at Linacre I also monitor and record another 12 boxes at 2 other sites in North East Derbyshire. Both sites have 6 boxes, and the results from these boxes are also sent off to the BTO's Nest Record Scheme.

The first site, a farm in Coal Aston, where we also do some mist netting was checked on 23rd. Unfortunately, this site was very similar to Linacre, with just 3 of the 6 boxes in use. One box had a fully lined nest, with 2 eggs, whilst the other 2 boxes had the start of a nest (N1) and a slightly more advanced nest (N3) in it. I'll check them again next week, to see what, if anything, has developed.

The other site, a churchyard in Chesterfield, was checked yesterday, and, thankfully, had 4 active nests with eggs in them and another nest that had been built by a Nuthatch. This nest didn't have any eggs.... yet! If it does get used, it will be the first time one of these boxes has been used by this species here. Again, I'll give it a few weeks and then pop back to see what's happening. 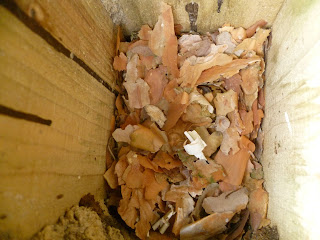 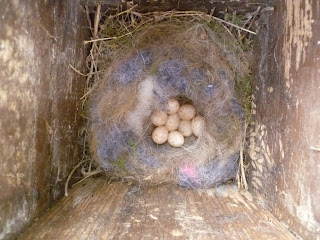 Tit nest
Posted by Linacreblogger at Sunday, April 29, 2018 No comments:

The Spring so far has been colder than normal and wet. As a result I wasn't expecting too much when I went to Linacre tonight for my first check of the nestboxes. Unfortunately, my initial thoughts were correct with just 14 boxes containing complete nests and the first few eggs (either Blue or Great Tits) There were, however, another 30 boxes containing the start of nests, so the final total my increase. All results will be sent off the BTO's Nest Record Scheme. 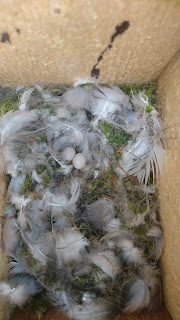 Whilst walking around the reservoirs I also heard my first Linacre Willow Warbler of 2018, along with 1 singing Chiffchaff, 1 singing Blackcap, and a lovely flock of approximately 40 Swallows and 2 House Martins (also first 2018 Linacre record) feeding low over the top reservoir. A nice surprise was a "buzzing" Lesser Redpoll by the top reservoir, the first 2018 record.
Posted by Linacreblogger at Thursday, April 26, 2018 2 comments:

I haven't updated the "year list" for a few weeks, so, after visiting the RSPB Bempton Cliffs reserve yesterday I thought I'd do a quick post to bring it up to date. 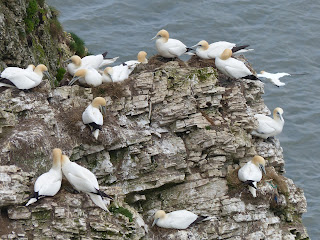 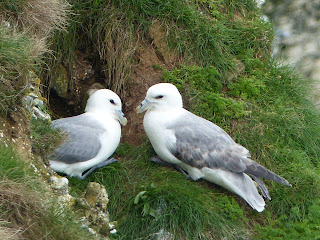 I was down at Linacre yesterday morning with Luke and 5 other members of Sorby Breck Ringing Group for a ringing session. We also had time to check the owl boxes, and recorded 2 new breeding species using the boxes!

The first species that we found in one of the boxes was Stock Dove. This is an under recorded species at Linacre, so it was really nice to find it breeding. One bird flew out of the box as we approached. A quick look, found 2 eggs. 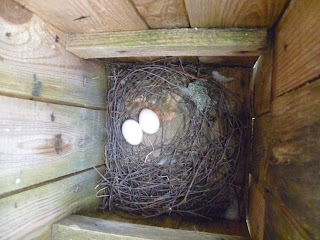 The second new species was Tawny Owl. A sitting bird was found as we checked the other boxes. She didn't come off the nest, so, although we couldn't confirm breeding (yet), it looks as though she might well have eggs or small chicks underneath here. 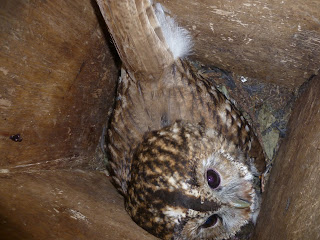 Two other boxes were checked, and both contained Mandarin Ducks. One box had a sitting female and 13 eggs. The other box didn't have a female bird, but it did have 12 cold eggs. Hopefully, the female will come back and continue to incubate them. 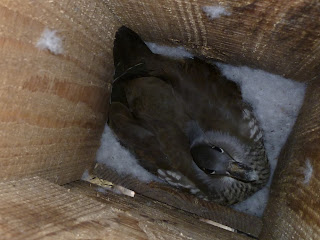 All 3 nests will be monitored for the BTO's Nest Record Scheme.

It's always great to hear, see and catch the first warblers of the year. Especially nice, however, was the fact that the retrap Blackcap was a bird we'd ringed at Linacre as a juvenile on 11th June 2017, showing site fidelity. Hopefully it'll stay and breed and we'll retrap it again later in the year. 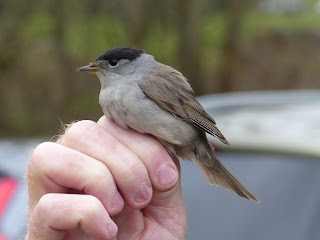 The Chiffchaff was also a bird we'd ringed previously at Linacre. This bird, however, was a little older, having been ringed as an adult male on 17th April 2016. Interestingly, the Chiffchaff hasn't been re trapped at Linacre since 2016. Was it here last year, or did it go somewhere else? Does it stay to breed or move somewhere else? As always, lots more questions than answers!!!

Another male Blackcap was seen and heard singing. Luke managed to get a photo, showing it wearing a ring! Unfortunately we didn't catch this bird, so we don't yet know whether it was ringed by us or elsewhere. Again, let's hope we can catch it later in the year to find out more information about it. 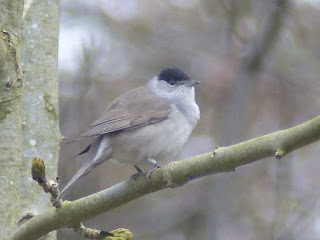 Other sightings from Linacre today included a Common Sandpiper on the bottom reservoir, the second record of the year (thanks Luke!), Green Woodpecker (heard), Sparrowhawk (1 over), Cormorant (3 over) and the first Butterfly of the year, a Small Tortoiseshell. 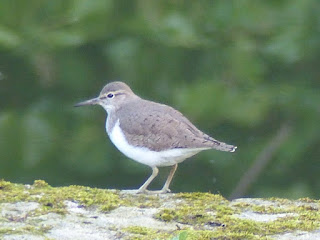 Common Sandpiper
Posted by Linacreblogger at Sunday, April 22, 2018 No comments:

The weather this Spring has been very stop and go, with temperatures below average and lots of rain. As a result, the Starlings that nest in a box on the side of my house have also been slow to start breeding.

Last year the nest was started on 26th March, but this year, the first signs of a nest didn't come until 6th April. 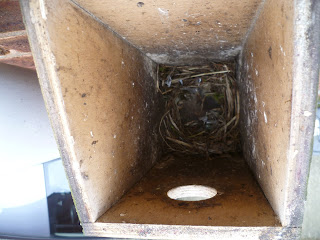 The first eggs (3) were then found on 16th April. Working backwards, the first egg must have been laid on 14th April (10 days later than last year). 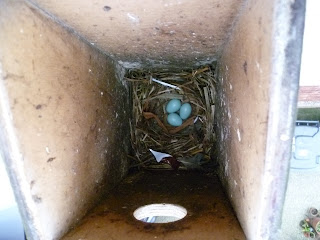 Hopefully, a full clutch of 5 eggs will be laid again this year, and then incubated for around 12 days, hatching around the 30th April.

As always, the details of this nest will be forwarded to the BTO's Nest Record Scheme.
Posted by Linacreblogger at Monday, April 16, 2018 No comments:

Luke and I went to Rutland Water Nature Reserve on Thursday to catch up with the Ospreys that had returned to breed on the reserve. We spent the day there, and got great views of the Manton Bay pair, along with another 4 "year ticks", including a Wheatear, that was quite unexpected. We also a breeding plumaged Mediterranean Gull that had originally been ringed in Poland.

The weather was great, 12 degrees, bright blue skies and sunshine, so we also managed to get our first butterflies of the year; 1 Comma, 1 Small Tortoiseshell and 3 male Brimstones.

The other "year ticks" (numbers 103 - 107) on the list below, were seen at Scarborough on Tuesday (3rd), where I also had a stunning breeding plumaged Mediterranean Gull. Unfortunately, I couldn't get a photo as I'd left my camera at home!!!!!

The Chiffchaff, 4 in total, were seen at Linacre on Wednesday 4th.

In my last post I mentioned  that I had 2 new birds whilst in Iceland last week. The first bird was Ptarmigan.  Two winter plumaged birds were seen as we drove across the island.

The second species was Harlequin Duck. 5 birds, 4 males and a female, were seen on the River Olfusa, while we were staying in Selfoss. Great birds! 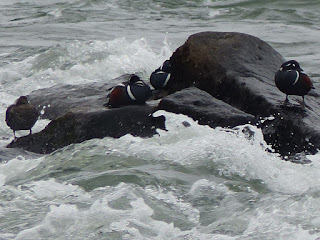 Jayne and I were in Iceland for 4 days last week. It wasn't a "birding break", but we did get some nice views of the local birdlife, including 2 "lifers" and a darvic, colour ringed Redwing.

The first thing to say about Iceland's birds, is that there aren't that many... at least not in March! The first species we saw was Raven. Up to 6 birds were seen flying around together, and it was the only species of corvid seen during our trip. Having said that, they were very easy to see, and included several birds present in and around the streets of Reykjavik. 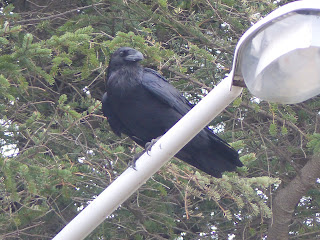 We spent our first day in Reykjavik, and it was here that we found a very noisy and confiding group of Redwing, feeding with a couple of Blackbirds and Starlings. 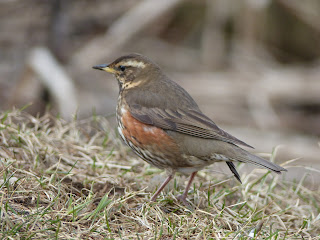 In amongst the Redwing was a darvic, colour-ringed individual, 075. A quick search of the internet, found a project, The Turdus Project (see here), being run by the University of Iceland, and I was able to find out that this bird had been ringed in Reykjavik on 23rd May 2017, as a nestling. It had been reported  10 times in and around the city since then, and had not migrated. This is one of the aims of the project, to see the link between migratory strategy and breeding success, so it'll be interesting to see how the birds that stay in Iceland for the winter, do, compared to those that migrate. Here's the only photo I got of 075. 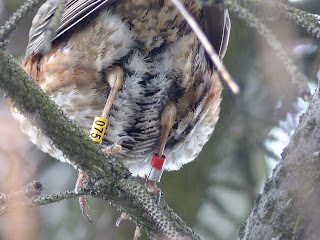 A walk along the sea front produced several pairs of Eider Duck, whilst in the harbour we spotted Herring,  Lesser and Great Black-backed Gulls, and then, a couple of distant adult Glaucous Gulls. I tried luring them in with some bread (about £5.00 a loaf!!!), but they weren't interested.

That's it for the first day. More in a second post.

Posted by Linacreblogger at Monday, April 02, 2018 No comments: