I don't tend to get much news of the birds that I ring, so it was very nice, earlier this week, to get 2 emails from our Group's data manager of 2 recent recoveries.

The first email had details of the first ever Mistle Thrush that I ringed, at The Avenue Nature Reserve in Chesterfield on 8th February 2015 (see here for details). The bird was found, freshly dead, just 2km away in New Tupton, on 8th March 2018, 1124 days after ringing. When it was ringed, it was aged as a 5, i.e. it had been born in 2014, making it nearly 4 years old.

The second recovery was of a female Siskin that I caught (controlled) in my garden last week. It was my first control Siskin, and had originally been ringed on 14th May 2017 in Fort Augustus, Highland, 475km away from Dronfield. Presumably, it was a bird that had flown south for the winter, and was moving back north to breed. In total I've ringed 13 Siskins in my garden since August 2017, so a recovery of one of the others would be very nice too!!

At the time of writing, we're experiencing another weekend of heavy snow, and there are still at least 7 Siskins visiting the garden feeders. It is possible (likely?) that they will hang around for a while yet before heading back to Scotland.
Posted by Linacreblogger at Sunday, March 18, 2018 No comments:

Last Sunday, when the worst of the snowy weather from the "Beast from The East" was over I popped down to Linacre for a couple of hours. It was still only 1 degree and there was snow on the ground and ice covering about a quarter of the bottom reservoir. 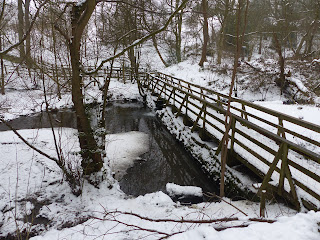 Snow on the top reservoir 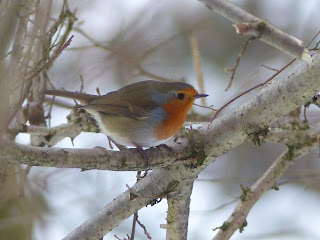 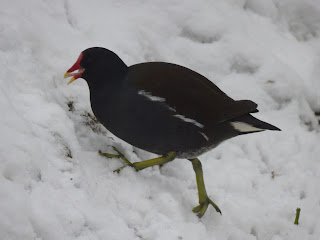 Moorhen
Posted by Linacreblogger at Saturday, March 10, 2018 No comments: