I had a short visit to Rufford CP this afternoon and saw 3 darviced Black-headed Gulls and 1 metal ringed bird. 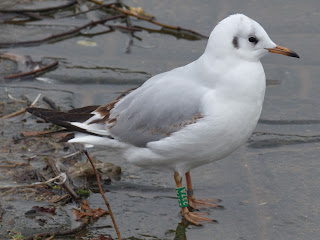 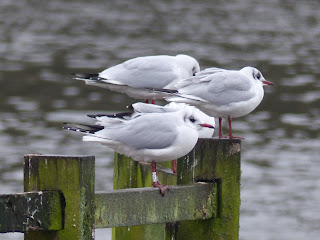 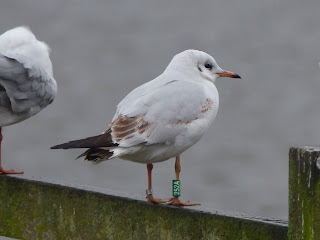 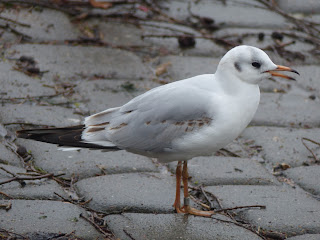 I carried out the first Linacre WeBS count of the year this morning. The weather was very still and grey, with a temperature of 7 degrees.

Whilst in Scarborough on Saturday 11th, I saw 4 colour-ringed Turnstones with the following ring combinations : white over red, orange over black, green over yellow and blue over white. They were all ringed in Scarborough harbour, and I've seen all these birds in previous years. Here are the details. 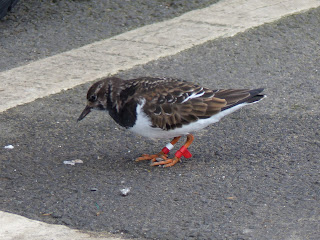 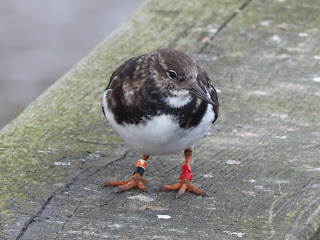 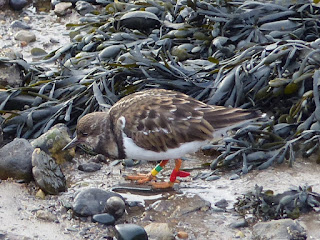 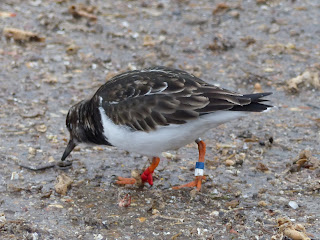 blue over white
Posted by Linacreblogger at Tuesday, January 14, 2020 No comments:

On Saturday, I spent a few hours in Scarborough, with my wife and daughter. As always, I started off the birding in the Holbeck Car Park, where I caught up with my first Mediterranean Gulls of 2020. In total, I saw 3 adult birds and 1 2nd winter bird, including this darvic-ringed bird (PNN5). This bird is a regular winter visitor to the Scarborough area, having been recorded annually since 2013, when it was ringed, as an adult, 1290km away in Poland . I also had a fly-by Peregrine Falcon, whilst watching the gulls. 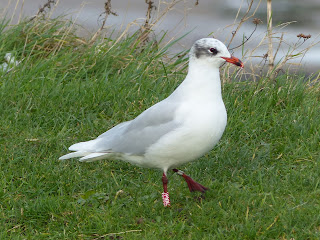 Afterwards, we had a walk around the harbour and South Bay area, where we added Feral Pigeons, Great Black-backed Gull, Turnstone and Red-throated Diver to the list. Four of the Turnstones were colour ringed, and I'll write another post about them later. The Fieldfare (c.100) were seen feeding in fields on the drive home.

Posted by Linacreblogger at Sunday, January 12, 2020 No comments:

Last week, Luke and I visited Linacre (see here). Whilst there, I managed to add several birds to my "year list" (numbers 61 - 71). I was particularly pleased with the Woodcock and Pied Wagtail ( 2 species very rarely seen at Linacre).

The final species, Brambling, was seen at the National Trust's Longshaw Estate, where Jayne and I saw a flock of at least 20 birds in the Beech woods by the small pond.

As well as visiting Rufford Park last week (see here), I also had a quick visit to Alvaston Park in Derby.

The trip was quite frustrating as, although there were 200+ Black-headed Gulls in and around the lake, I couldn't find any darvic ringed birds in the hour and a half I was there! Thankfully, a well known metal ringed bird, VA4073 ( a Danish-ringed bird, born in May 2018, and seen here in November 2018 and November 2019), came to the rescue. 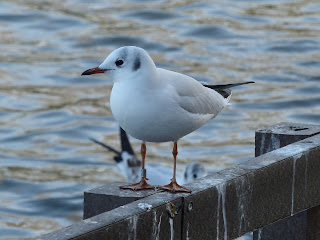 Whilst there, I also saw a couple of darvic ringed Canada Geese. Again, these birds were well known, having been recorded here in February 2019 (see here). The birds had originally been ringed at the University of Nottingham in 2016 and 2017. 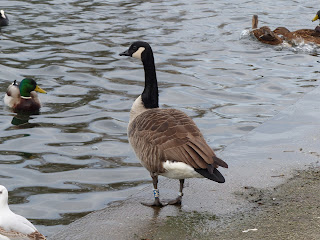 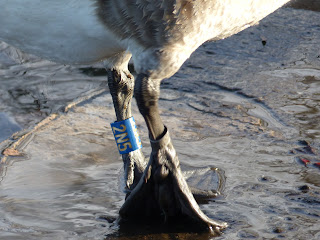 2N5
Posted by Linacreblogger at Tuesday, January 07, 2020 No comments:

Luke and I had our first visit to Linacre on Sunday morning, and it turned out to be a very good trip with some really interesting records.

Away from the water, there were lots of small birds around including: Mistle Thrush, Bullfinch, Siskin, Green and Great-spotted Woodpecker, Nuthatch and Treecreeper.

The most interesting sighting of the morning, however, came as we were walking through the woods by the middle reservoir. We noticed a bird on the ground, and soon realised it was a male Sparrowhawk. As we walked towards it, it took off and we noticed it had left some prey behind, a still-warm Woodcock!!! The Sparrowhawk had started to eat its meal, so, after taking a few photos, we left the bird where we'd found it, and hopefully it came back to finish it off when we'd gone. 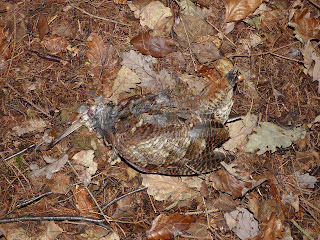 Woodcock (deceased)
Posted by Linacreblogger at Monday, January 06, 2020 No comments:

In the first few days of 2020 I've had a couple of trips to Rufford CP to get my first sightings of darvic ringed Black-headed Gulls for the year. All the darvic-ringed birds were familiar birds, but I did also manage to find, and read, a metal ringed Swedish bird (details sent off), along with some darviced Mute Swans. 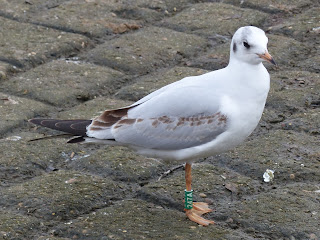 Whilst at Rufford, I also saw 2 darviced Mute Swans, 108Y and 439Y, both birds that I'm sure were ringed by Sorby Breck Ringing Group. This is my first sighting of these birds here. I'll update the blog when I have the ringing details. 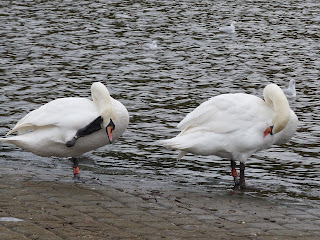 My second visit, on 3rd January, had the same gulls as the day before, and a new one, 230A, which is a bird that was ringed at Center Parcs, on 2nd February 2019, as an adult bird, and one that I'd seen a couple of times in September 2019. 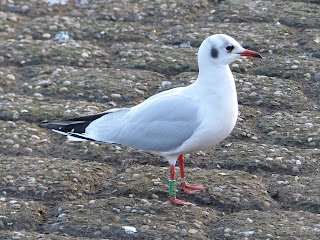 UPDATE: The Swedish gull was ringed, as a pullus, 950km away in southern Sweden on 1st June 2019.
Posted by Linacreblogger at Sunday, January 05, 2020 No comments:

Yesterday, I had another day out birding and managed to add another 8 species to my Year List for 2020.

My first stop was the Nottinghamshire Wildlife Trust's Attenborough Nature Reserve where I managed to add 4 new species (numbers 53 - 56), including a very cooperative  Slavonian Grebe. 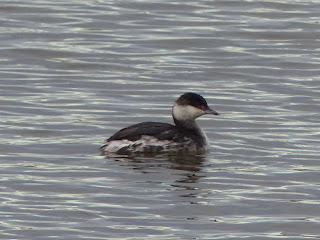 I then drove down to Alvaston Park in Derby to check for gulls (more on that in another blog), where I added numbers 56 - 58. The Red Kite and Sparrowhawk, were added as I drove to Rufford CP.

Posted by Linacreblogger at Saturday, January 04, 2020 No comments:

On Thursday, I decided to go and see a Rough-legged Buzzard that has been present at a site near Doncaster. I arrived on site and saw it hunting low over the fields. I then got excellent views of it perched up in a distant tree.

I also visited a few other sites, including Angler's Country Park and Rufford Country Park, where I recorded the following birds

Hello, and welcome to the first blog post of 2020. This year's birding began at about 7am, when I was woken up by a singing Robin. followed closely by an alarm calling Blackbird and chirruping House Sparrows. Not a bad way to start a new year!

The next few birds (numbers 4 - 15) were seen in and over the garden, including a very nice surprise of a skein of Pink-footed Geese heard flying above the fog.

The remaining birds (numbers 16 - 38) were recorded in a few hours at Carsington Water. The obvious highlights being a bobbing Jack Snipe on the Visitor Centre Island and a juvenile Great Northern Diver fishing off Stones Island (both species I missed out on in 2019).

Posted by Linacreblogger at Wednesday, January 01, 2020 No comments: