Yesterday afternoon the temperature rose to 15 degrees celsius, so I decided to have my first proper look for insects at Linacre this year. Luke had already seen 2 Brimstones and 2 Peacocks on Friday 29th, so I knew there were a few insects about.

I walked along the south side of the middle reservoir, and managed to see a total of 4 Peacocks, 3 Commas and 3 Dark-edged Bee Flies. 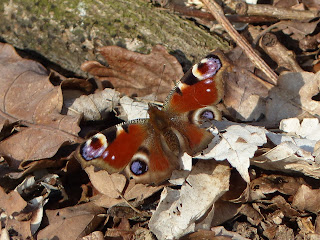 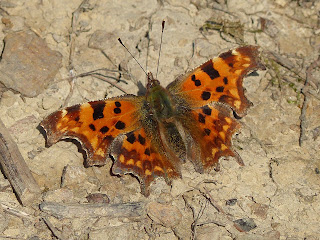 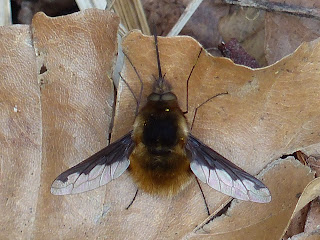 Along with these three species, I also managed to spot my first species of hoverfly, a Drone Fly (Eristalis sp.) , and a bee species , which may be some kind of Mining Bee. I'll update if, and when I manage to get a proper identification.
Posted by Linacreblogger at Sunday, March 31, 2019 No comments:

This morning I was down at Linacre for the first ringing session since January with 3 other members of Sorby Breck Ringing Group. We got on site at 05:30, and the first bird we caught was a retrap Chiffchaff. On checking, we found that it had been ringed, as a 3 (born that year), at Linacre, in August 2018. Great record!

The retrap  Dunnock was first caught and aged by us, at Linacre, as a 5, in January 2015, meaning it was born in 2014. This was the first time it had been retrapped.

One of the Blue Tit retraps had also been ringed by the group (me in this case), as a pullus, in one of our boxes (c.12) last year on 29th May. This was also, the first retrap of this bird.

Other birds seen during the ringing session were: Tawny Owl (2 seen), Buzzard (1 over), Sparrowhawk (1 over), Kestrel (1 over), Canada Goose (2 flew over), Blackcap (1 heard singing in the ringing site, the first Linacre sighting of 2019) and Raven (2 seen flying over).
Posted by Linacreblogger at Saturday, March 30, 2019 No comments:

BHG EUM3 still around, and a new friend

I spent half an hour at Rufford Country Park this afternoon (in the wind, rain, hail and sunshine!) to see if any Black-headed Gulls were still around. There were just 20ish birds present, including an old favourite, Dutch-ringed EUM3. I first saw this bird at Rufford on 3rd February 2019, and again on 18th February 2019. It is a 2 year old bird, ringed in The Netherlands in May 2017. What was really nice to see today, was how far it had moulted since I last saw it. Here's a couple of pictures. The first one was taken on 18th February 2019, and the second one was taken today. What a transformation! 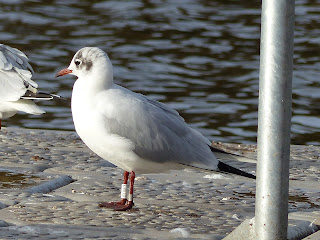 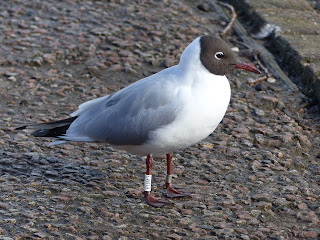 Luke was also there today (with his family), and he also saw EUM3, but he also managed to get a new metal-ringed bird, starting VA4 _ _ _ . 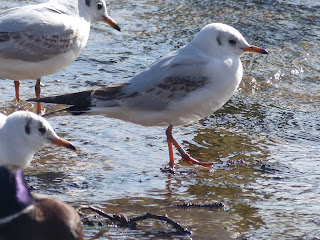 As you can see from the picture, this is a 1st winter bird, born in 2018. I'm pretty sure it's a Danish bird, for 2 reasons. Firstly, I've had another bird with a ring starting VA4 this winter, in Alvaston Park, Derby, which was confirmed as a Danish bird, and, perhaps more importantly, the letters run vertically up the ring, which is the same as for the other confirmed Danish birds. Unfortunately, neither of us could get the remaining 3 digits (I didn't even see the bird!!) so this might be "one that got away".
Posted by Linacreblogger at Sunday, March 10, 2019 No comments:

The "Year List" has moved on again, with several new species added at Carsington Water last weekend (numbers 119 - 121), Red-legged Partridge at Linacre, Iceland Gull at Ogston Reservoir (1 adult and 1 1st winter) on Saturday, and Peregrine Falcon (Hardwick Wood fly over during a ringing session) and Great Grey Shrike at Clumber Park on Sunday. 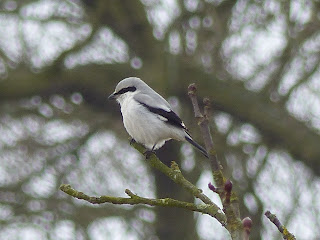 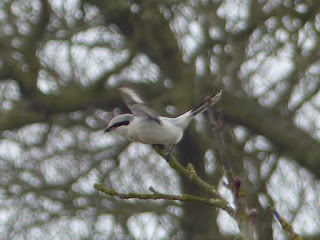 Whilst at Ogston there were also a 1st winter and a near adult  "Viking" Gull a.k.a. a Herring x Glaucous Gull hybrid in the roost. The 1st winter looked very Glaucous-like, but had dark primaries, but I didn't manage to see the adult bird. Nice to see, even if it's not a  full species!

Luke and I had a couple of hours at Linacre yesterday morning, hoping to see, or hear, our first spring migrants. Unfortunately, we didn't see, or hear, any migrants, but we did get some good counts of the waterbirds, and recorded a species that we'd not recorded at Linacre since 2014! 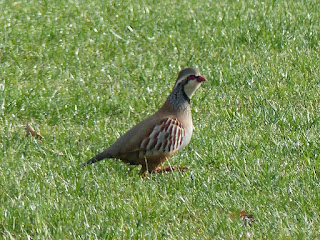 Red-legged Partridge
Posted by Linacreblogger at Sunday, March 03, 2019 No comments: