This winter has been phenomenal for the number of darvic and metal-ringed Black-headed Gulls that me and my nephew, Luke, have been able to find in Derbyshire and neighbouring Nottinghamshire (17 and counting to date). Today I managed to add not 1, not 2, but another 5 to the list!!! (22 in total).

All five were found at Rufford Country Park in Nottinghamshire. When Jayne and I arrived, the lake was about 95% frozen, and there were at least 200 Black-headed Gulls (and up to 10 Common Gulls) on the ice. As we approached the café, there were several families feeding the Mallards and Canada and Greylag Geese, which, in turn, attracted in approximately 30 - 40 Black-headed Gulls.

The first colour-ringed bird that we found was EUM3, a Dutch ringed adult bird. This bird had been ringed 395km away, on Benthuizerplas, a breeding colony near Zoetermeer, The Netherlands (see here), as a chick, on 27th May 2017. It was first seen at Rufford in November 2018, and has been reported there, throughout the winter. 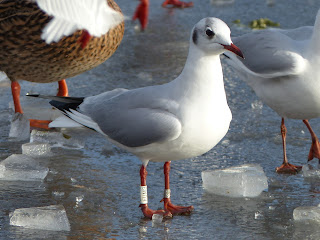 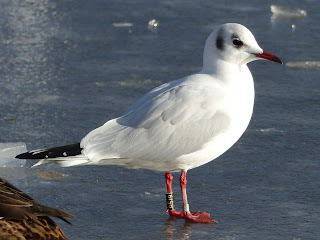 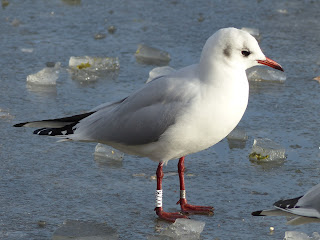 The final two birds (217A and 221A) were perhaps the most exciting, as they had been ringed by a member of the Ringing Group I am part of (Sorby Breck Ringing Group) in January this year. 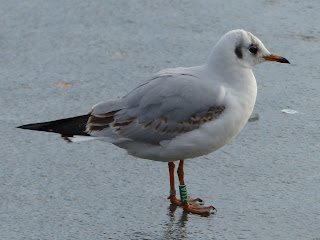 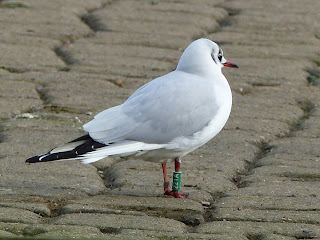 It will be interesting to see if these wintering birds will relocate abroad in the spring, or whether they'll hang around and breed in this area.
Posted by Linacreblogger at Monday, February 04, 2019