I went to Bakewell on Saturday to see if there were any Black-headed Gulls back from their breeding grounds. There were about 20 birds present including 3 juvenile birds (born this year) in amongst the returning adults. 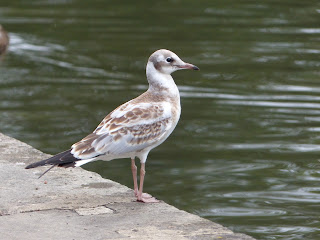 One of the adult birds present was wearing a metal BTO ring, and I managed to get a few photos. Unfortunately, I only got 5 of the 7 letters and digits, EW97 _ _ 5 but, on checking my records, I noticed that on 1st September 2018, an adult gull with ring number EW97345 was seen by my nephew, Luke. This bird had been ringed in Boston, Lincolnshire on 9th January 2010. When I checked the photos of this bird I noticed that the ring was on "upside down", as was the bird I saw on Saturday, so I'd say, in all probability, it's the same bird. Of course, the only way to prove this is to get across and see it again. This time with the full number! 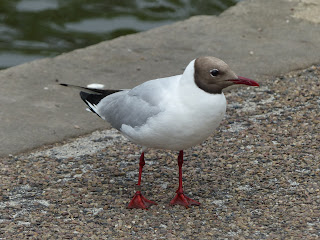 Whilst there, I also spotted a Canada Goose wearing the darvic ring AAAH. This is also a known bird, having been first seen here on 10th February 2018 (see here). She had been ringed in Bowness on Windermere 2nd July 2013 and has been in Derbyshire since at least  September 2014. When I saw her on Saturday, she was with a partner and several goslings. 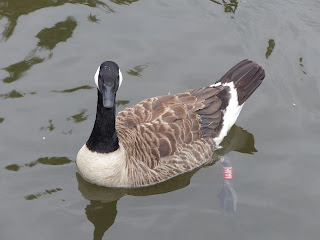