I knew today's outing was going to be good, but I couldn't have dreamed that it would be as good as it really turned out to be!

First up this morning was a meeting with my ringing trainer, another 2 members of the Sorby Breck Ringing Group and one of the DCC rangers at Linacre. Our aim was to investigate a new ringing site and set up a feeding station to encourage birds into the area, so that we can "mist net" here later in the year. The site we chose was next to the Rangers' Base in an area of open grassland and willow scrub. Two feeders were put up and two new net lanes were identified. Lots of birds were heard singing in the area, including Long-tailed Tits, Chiffchaffs and a Song Thrush, so we should get some good birds in the nets. We'll continue feeding the area for a few weeks and hopefully begin ringing later in the summer. 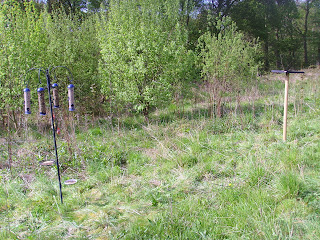 After setting up the feeding station we set out to check the nestboxes, with the hope of ringing a few chicks. At the moment we have 91 nestboxes on site and out of these, 38 contained active nests i.e. with eggs or chicks, including box 11, the one on my header, which contained 5 eggs! Just 2 of these nests had chicks in them and both broods were just a few days old and so too young to ring yet. A return visit in a week or so should be very productive though! 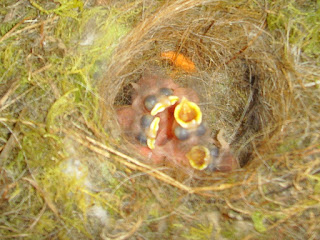 First chicks of the year!

To compenstae for the lack of pulli in the nestboxes we decided to check the Robin nest that I found earlier in the season (see here). To my great surprise the nest was still intact and 5 young were ready for ringing! These are the first birds to be rung at Linacre and the two that I rang were my first ever pulli! Here's one - gorgeous! 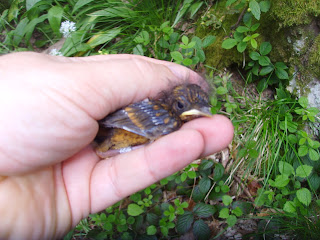 Other notable sights today were the year's first Peacock and Orange Tip butterflies and a very low flying Common Buzzard. Now, where is his nest? That should be worth investigating!
Posted by Linacreblogger at Sunday, May 13, 2012