This weekend was the time to carry out this month's WeBS count at Linacre, so I was down there at 7am with Luke. We recorded  the usual species, including a good number of youngsters. Numbers were as follows: Mallard (68, including 1 brood of 5 ducklings), Tufted Duck (26, including 1 brood of 5), Mandarin Duck (19, including 8 ducklings), Moorhen (2, 1 adult and 1 juvenile), Coot (9, 5 adults and 2 broods of 3 and 2 chicks), Grey Heron (3), Grey Wagtail (5) and Great-crested Grebe (6, 2 adults and 4 juveniles). Unfortunately, no sign of the Shag, which was last reported on 19th July, but I'm sure someone will find it again soon. 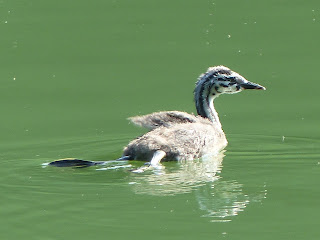 The weather for this morning's walk was super, being warm (16 degrees) and sunny on arrival, and rising to 20 degrees by the time we left. As a result, there was a great deal of insect activity around the site with 4 species of butterfly, 4 species of moth seen along with several bumblebees, 2 species of damselfly and 1 species of dragonfly. The butterflies were: Small Tortoiseshell (2), Large White (3), Meadow Brown (20+) and Small Skipper (1). 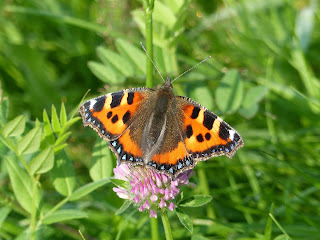 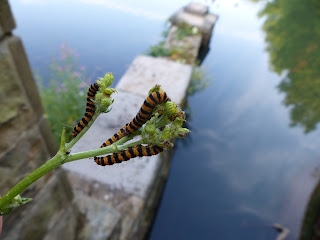 Damselflies seen were: Common Blue (10+) and Blue-tailed (1 male). The Common Blues were the most numerous, and included males, one pair "in tandem" and at least 2 "teneral" or newly emerged individuals, lacking the colour of the mature damselflies. 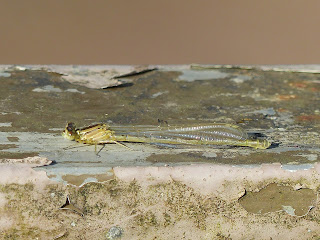 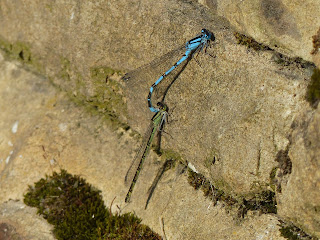 The dragonfly species seen was a single adult Brown Hawker, and this exuvia, also possibly a Brown Hawker, that was found floating in the water of the top reservoir. 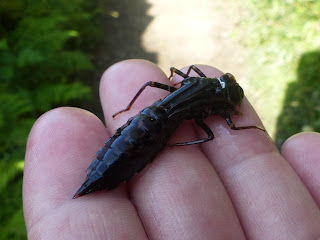