I was at Rufford Country Park on Sunday to check on the Black-headed Gulls. Two familiar rings were read, 206A (British-ringed) and EUM3 (Dutch-ringed), along with a new bird, 230A. 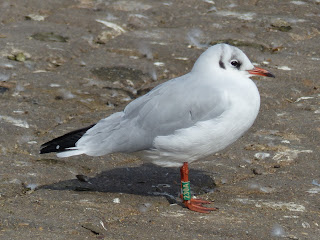 Regular readers of this blog will recognise the ring colour and sequence as being one used by Sorby Breck Ringing Group (the group I ring with) and Birklands Ringing Group. I contacted the lead ringer of this scheme and he confirmed that 230A had been ringed at the nearby Center Parcs site on 2nd February 2019. My siting was the first since then. Hopefully, it'll hang around for the winter, and get spotted back on its breeding grounds next Spring.
Posted by Linacreblogger at Wednesday, September 11, 2019