Whilst we were away in Scotland we visited a small town called Haddington. The River Tyne runs through the town and whilst walking along the riverside we noticed a family party of Mute Swans, all of whom were wearing colour rings.

I sent the details off to to the BTO  and yesterday I received a reply from the Lothian and Fife Swan and Goose Study Group. The juvenile birds had been ringed on the river in August this year along with the adult male bird . The adult female bird was a little more interesting, as she had been ringed on the same river as a cygnet,  in 1999. She had previously bred/held territory with another bird on the same river in nearby Hailes and East Linton, before moving back to Haddington to breed in 2009.

Unfortunately I didn't manage to get any photos of the swans, but there was a pair of very confiding Goosanders who were obviously used to coming for bread along with the local Mallards and wintering Black-headed Gulls, so I'll include a photo of one of these birds instead. 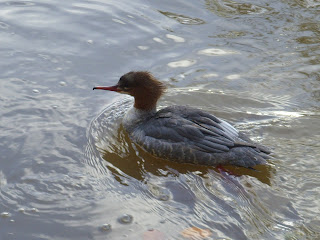