A lot can happen in a week, when it comes to the nestboxes at Linacre. This morning's check, showed that 3 had been predated - adult feathers and broken eggs (most likely some kind of rodent or mustelid), the chicks in one box were, thankfully, still going strong, and the pair of Pied Flycatchers had built a nest. Hopefully, they'll lay some eggs this week. The Mallard nest found last week was empty but undisturbed, so hopefully they've hatched.

Other birds seen were: 2 Swallows, 2 Yellowhammers (1 male and 1 female by the main entrance), 1 Skylark, singing by the top reservoir, 1 singing Mistle Thrush, 4 Chiffchaffs and 3 Blackcaps.

One species of insect was also seen, which I think is a Stonefly. 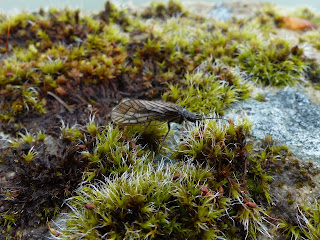 Stonefly sp
Posted by Linacreblogger at Sunday, May 09, 2021 No comments:

It's been a couple of weeks since I last checked the nestboxes at Linacre, so I popped down for a couple of hours this morning, before the rain and wind started!!

It was a mixture of good news and bad news (as is always the case with every nestbox season). The bad news was that all three owl boxes, that had been used by Mandarins this year, appear to have failed. A quick check yesterday afternoon, revealed cold, uncovered eggs and no females. The better news, however, is that this morning's tit box check revealed a total of 32 active nests, the first chicks of the year (7 Great Tits, still naked and blind, so most likely very recently hatched),  my first ever record of a Coal Tit using a nestbox, and a pair of Pied Flycatchers entering a nestbox!! In addition, the Mallard's nest with 8 eggs was empty this morning (hopefully fledged successfully), and another nest, with 6 eggs this time, was found on the floor in the woods. 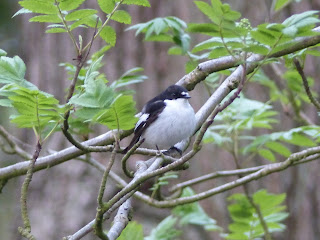 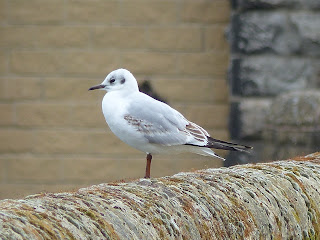 Black-headed Gull
Whilst on site, I also had a short time on the ringing site, where I saw a pair of Bullfinch (first Linacre record of the year!), a singing Song Thrush, 1 singing Willow Warbler, and, best of all, my first Whitethroat of the year.
Year List update:
139 - Whitethroat
Posted by Linacreblogger at Monday, May 03, 2021 No comments:

Jayne and I had our near annual trip to RSPB Frampton Marsh today. Because of lockdown, there are quite a few common species missing from my "year list", so today's trip added a whopping 24 species!!

The day started well, with our first Swift of the year, followed closely by Reed, Sedge and Garden Warbler. As always, this site held lots of waders, the best of which was a male Dotterel. Unfortunately, it was slightly too distant for a photo, unlikely a very "showy" Jack Snipe and Wood Sandpiper. 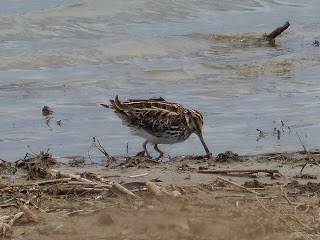 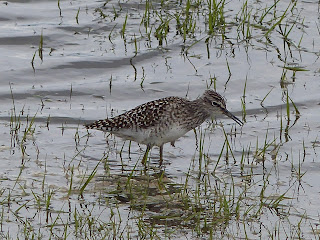 This morning's visit was to check the nest boxes. In total there were 30 boxes in use, ranging from N1 (a nest just being started) through to sitting birds. All the boxes appeared to be tit nests, except for one Wren nest. The highlight, however, of the morning was the discovery of the year's first singing Pied Flycatcher. It was in the vicinity of a nest box, so I'm keeping everything crossed for another successful breeding season (1 successful box last year, fledged 7 young). It's still quite early in the season too, so hopefully, there could be some more birds to arrive. A female Mallard was also disturbed from a nest, 1m away from a nest box, revealing a nest with 6 eggs. As always, the results of the nests will be recorded for the BTO's Nest Record Scheme. 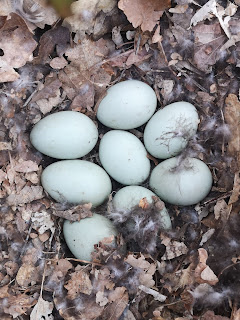 Mallard nest
Whilst on site this morning, I also recorded Green Woodpecker (heard), a Mallard with 13 ducklings (the first 2021 record), Willow Warbler (1 heard by the top reservoir), Reed Bunting (one male heard singing in willows by the boardwalk), Skylark (1 singing over fields by the top reservoir), Curlew (1 heard, but not seen, from the top reservoir - my first record here since 2018) and Canada Goose (6 - my highest count of the year). The Moorhen nest on the top reservoir was empty, but no young were seen.
Posted by Linacreblogger at Sunday, April 18, 2021 No comments:

With a relaxation of lockdown rules allowing travel further afield, Jayne and I decided to have a day trip to the coast, visiting RSPB Bempton Cliffs and Scarborough. The weather was great, with bright sunshine, no wind and 12 degrees. 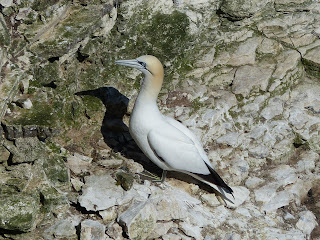 Gannet
After Bempton, we drove up to Scarborough where we had a walk along the South Beach up to the harbour area. Herring Gulls were everywhere, and the first new species was an adult Great Black-backed Gull. Other species seen here were: Redshank, Turnstone, Purple Sandpiper (one on the breakwaters), Rock Pipit and, best of all, a Great Northern Diver. 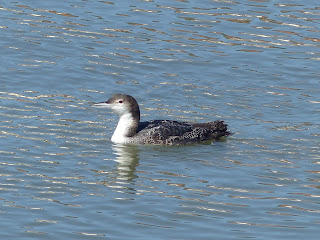 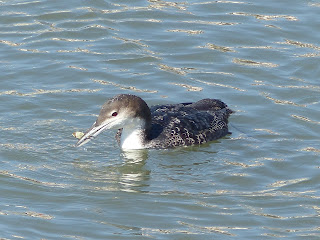 Today was this month's WeBS walk at Linacre. I had a wander round and recorded the following birds: Mallard (45), Mandarin (24), Coot (5), Moorhen (8), Great-crested Grebe (2), Tufted Duck (69),  Canada Goose (1), Lesser Black-backed Gull (2 adults), Goosander (1 female), Pied Wagtail (1) and Grey Wagtail (5). The Grey Wagtails were singing and displaying, and I managed to get this interesting photo. 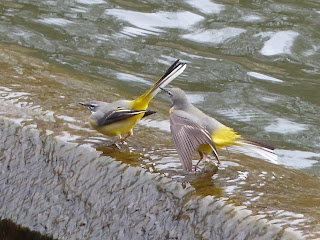 In addition to these species there were also c.30 Swallows, 2 House Martins and 1 Sand Martin (feeding together over the top reservoir in a snow/hail shower!!) and 4 Buzzards. The best birds, however, were 3 Reed Buntings (2 males and 1 female) that I found feeding in and around the willows by the boardwalk on the top reservoir. This is only my third record of this species at Linacre (1 male ringed in 2013 and 1 male singing in the ringing site in 2019), so you can imagine how pleased I was to see them! Unfortunately, they didn't want their photos taking, and this awful picture, is the best I got!! 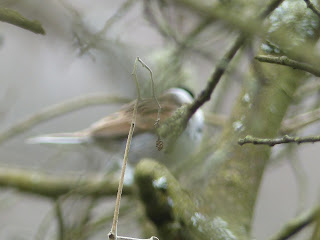 Reed Bunting (male)
The last bird of note was seen on Friday 9th, and was the first Common Sandpiper of the year. I usually only get 1 sighting of this species each year, as they pass through to their breeding grounds, so I was very pleased to catch up with this bird. It fed on the wall of the middle dam, and again, this is my best photo. 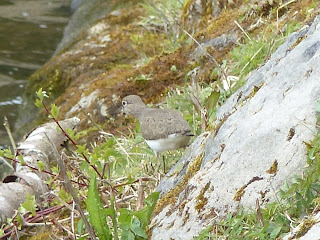 Common Sandpiper
Posted by Linacreblogger at Sunday, April 11, 2021 No comments:

Yesterday I went down to Linacre to meet up with some of the regular Severn Trent volunteers (thanks everyone, it was great to meet you all). One of the volunteers shared photos of  2 caterpillars that had been found on site. One was a Pale Tussock and the other was an Elephant Hawk-moth. Both species were new records for the site. 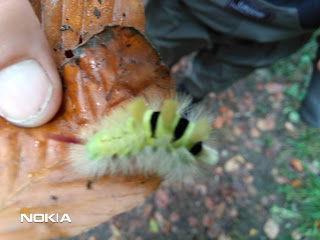 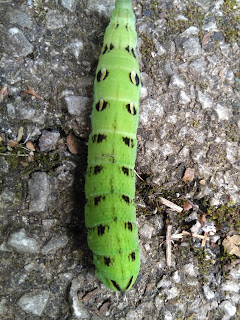 Whilst there, we had a first check in the "owl boxes", and found that 3 of the 5 were in use, albeit not by owls!! As usual, the 3 boxes all contained Mandarin Duck eggs, including 1 with at least 38(!) eggs in it - a classic example of "egg dumping" by several different females. The other 2 contained just 3 and 4 eggs. None of the broods were being incubated yet. Several pairs of Blue Tits were seen entering nestboxes, so it seems that the the breeding season is beginning in earnest. 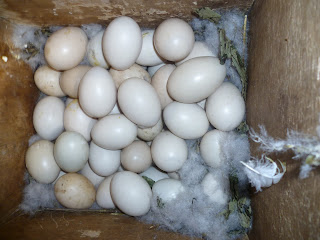 After the nestboxes, I had a quick walk around the middle and top reservoirs, and spotted my first Swallows (6), House Martins (2) and Sand Martins (2) of 2021.

Posted by Linacreblogger at Thursday, April 08, 2021 No comments: